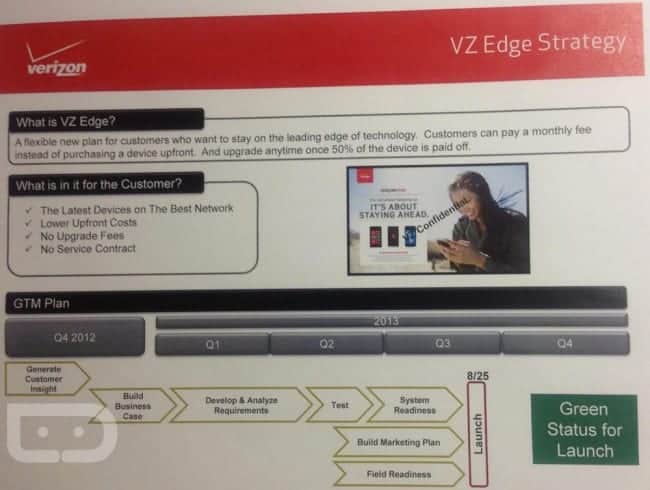 Right now Verizon only allows you to upgrade after 24 months. Now that's a long time for a new phone. Especially when manufacturers stop updating them after 6-12 months. In April, Verizon announced a new device payment that would allow their customers to upgrade phones by purchasing them at full prices with the payments spread out over a 12-month period. Now Droid-Life is reporting that Verizon is going to introduce a new upgrade initiative on August 25th. It'll be named "VZ Edge", which is going to allow customers to upgrade their phones more frequently to "stay on the leading edge of technology".

They've obtained a training slide, which details the new plan. VZ Edge looks to be a way for Verizon customers to avoid signing contracts and upgrade fees, while remaining on what they call the "best network" (although I'd beg to differ). The specifics of the plan are not yet available. The slide does mention that if customers are on the monthly payment plan, that they can upgrade to a new device at any time once they have paid off 50% of their current phone. The document doesn't really specify, but we are assuming it's only for those that participate in the device payment plan only.

Now is it just me, or does this look like Verizon's attempt at competing with T-Mobile's recently announced JUMP! program? Although it still looks like T-Mobile's JUMP program will be a better deal, even though we don't have the full details on VZ Edge yet. Comparatively on T-Mobile you pay $10/month for insurance and JUMP! which allows you to upgrade twice per year. Verizon doesn't appear to charge you monthly, but you can only upgrade after you've paid off half of your current device. Which means closer to every 12 months you get to upgrade. It's still much better than the 24 months currently, though.

How many of you want to hear more about this VZ Edge program? Let us know in the comments below.