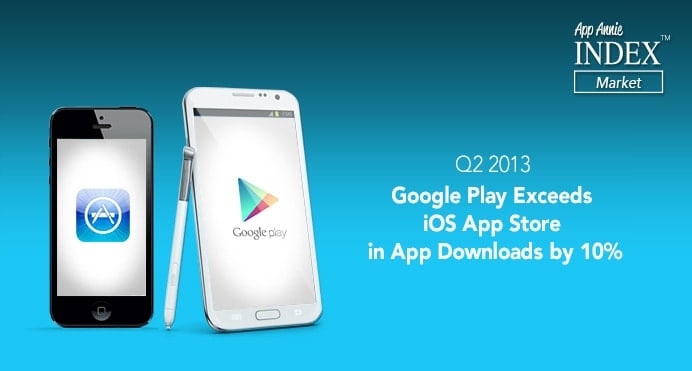 It has finally happened. After years of playing catch-up with the Apple app store, Android's Play Store has finally beaten it in number of total app downloads, after recently beating it in reaching the 1 million apps mark (Apple store has 900,000), and last year starting to beat it in app downloads per month (that's why it managed to catch up and beat it in total downloads now).

The battle between Android and iOS stores is not quite over, though. The iOS store still beats the Play Store in one key metric, and that's revenue. Google has just announced that it improved the revenue per user by 2.5x, and that it continues to grow, but right now the Apple store is still generating 2.3x the revenue for its developers, according to AppAnnie.

The reason the Play Store has been so behind, and yet it's catching up fast now, is because Google started to add the type of monetization Apple added to their store, years later, and it also took them a while to make the paid apps available in most countries, too.

Another big reason is that Apple started with a lot of iTunes users with credit cards tied to their accounts, and basically the Apple installed base has been educated to buy apps on impulse, since they didn't really have to go through any extra set-up process. Google has only started asking users for their credit cards for the Wallet accounts since Android 4.0, not even 2 years ago, and most Android users probably don't have one set-up yet, because people dodn't really know what a Google Wallet is.

Another major reason why the Play Store is behind, is because many of the very popular iOS apps are not available on Android, either. Those apps and games get used by many iOS users, which pay for those apps, but the same kind of money can't flow into the the Play Store until the apps exist there. Plus, the big companies do a lot of promotion for those iOS apps, too, which also leads to big money flowing into the Apple app store. But again, since those apps don't exist on Android, and they aren't doing the same sort of promotion, the Play Store receives less money in total.

I think it's only a matter of time before Google wins this one, too, though. Android has a much larger market share in terms of sales, every quarter, which means the Android installed based will also be much larger in a few years, than iOS. When that happens, I doubt many developers would still develop for iOS first. The Android platform will be the one to go, by default.