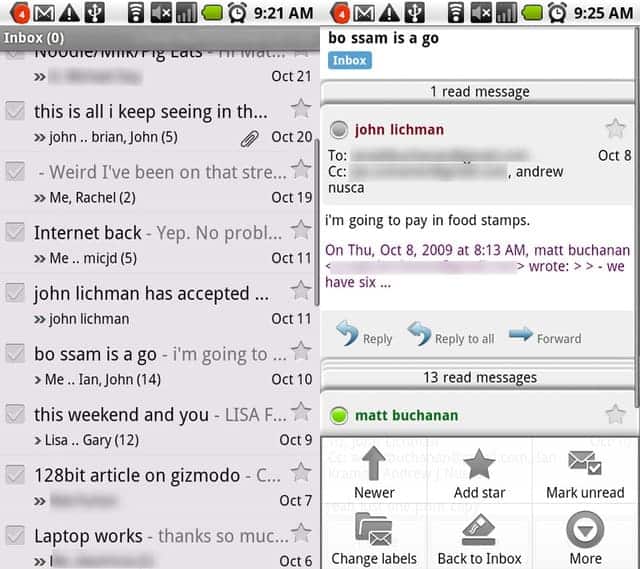 One the staples of Android is the Gmail app. Since just about every one of us that owns an Android device has a Gmail account, it's probably the most widely used app in the Play Store. Gmail looks pretty nice, of course many will say it could use some enhancements. But it didn't always look this way. In this week's Throwback Thursday, we're taking a look at Gmail for Android from the past.

This is version 2.0 of the Gmail app. It was widely used before Gingerbread. It was actually my first encounter with Gmail (prior to that I used Yahoo! mail). I remember using it on the Motorola Droid and HTC EVO 4G. Looking back on it now, it looks pretty sad. Thanks to Gizmodo for the image as well. Back then we had 3-4 inch displays, instead of the 5-inch and larger displays we have now. We weren't even at the qHD displays at that point. processors were still single-core and usually under 1GHz. RAM was around 512MB, and batteries were around 1500mAh. It's quite cool to see how Android has evolved over the years. But looking at some of our most commonly used apps to see how they've changed over the years is pretty neat as well.

Many of our readers are Android "newbies" meaning they started using Android 4.0. Most of us that write for Android have been using Android since the good old Eclair days and some even earlier than that. How many of you remember using this version of Gmail on some of your first Android devices? Could you imagine using this for Gmail on today's smartphones? Let us know in the comments below what you thought about this version of Gmail.