Here at Android Headlines, we are rather big fans of Google+. Mostly because it’s already integrated into everything we use to keep the site running. Which makes it pretty easy to use Google+. But many have called it a “Ghost Town”. Sometimes it is a ghost town. But the reason being is many of Google+’s users have day jobs. Comparing it to Facebook isn’t really fair since a big groups of Facebook and even Twitter users are students. 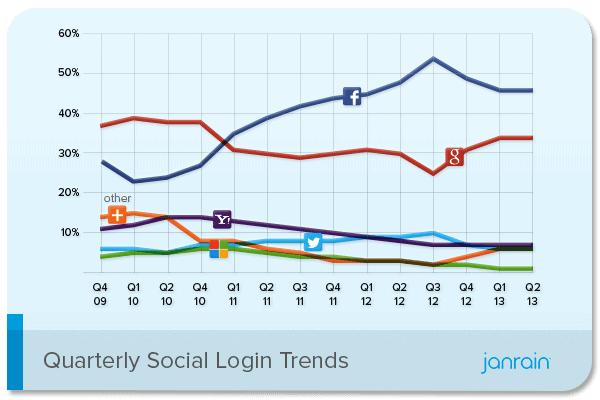 Some new reports coming out are showing that Google+ is now the number two social network behind Facebook. This new study was commissioned by Janrain, which shows that out of all the people that use social networks to login to various sites, about 46% uses Facebook. But Google+ is is in second place with 34%. That’s above Twitter, Yahoo, and Windows Live?

It shows that Google+ is solidifying itself as a contender for Facebook, and even others like Twitter and LinkedIn. Even though Google+ had a pretty late start to the social network game. In third place you’ve got Yahoo bringing in 7%, along with Twitter at 6% making them number four.

Google+ launched in June 2011, which is was in beta (required an invite to join) until it was available publicly in September 2011. Since then Google+ has been quickly making changes, adding new features, and even getting constant redesigns. I can’t remember how many different redesigns the site has had since I joined in June 2011. Currently, Google+ has over 500 million registered users, and 343 million active users. At least according to GlobalWebIndex’s study from last December, which is shown below.

As you can see, Facebook is twice as large as Google+, but in a close third and fourth is YouTube and Twitter. Then you’ll see plenty of China only social networking sites. Even MySpace made the list. Facebook has over 700 million active users, which is a lot. Then Google+ is growing faster. It’s holding pretty steady on social logins. So soon could we see Google+ becoming the number one social network? Probably, but maybe not for a couple more years. Facebook is still the top dog in social networking. Many people spend the majority of their time on Facebook, than on Twitter, and Google+. But with Facebook’s privacy issues as of late, that might quickly change.