Samsung is working with Google, not against them

Samsung is hosting it’s own developer event in October, the first ever for the Company and while some people have been claiming that Samsung is trying to ditch Android and Google, or that the relationship between the two is bad, the truth is that both companies denied this and have shown that the can work together and that they need each other. Samsung is not going away, at least not for now and if they do, the probably have more to lose than Google.

Samsung is not holding a “fork Android” event, they’re holding a developer event, and Samsung has a lot of platforms to offer. Android, obviously will probably be a major focus, but not in the OS but the SDK the company has, like all the features they added to their flagships for the last two years, and the Note line of devices, which have their own SDK for the S-Pen input. Samsung Even has the Samsung Hub which connects devices, but Samsung has way more to offer besides that. They have the Smart TVs, they have Windows Phone devices, they even have Tizen if they still want to give it a try. Samsung also manufactures home appliances, which are getting smarter and smarter every year, so why not ask developers to use them, make apps to connect phones and tvs with ovens and air conditioners. 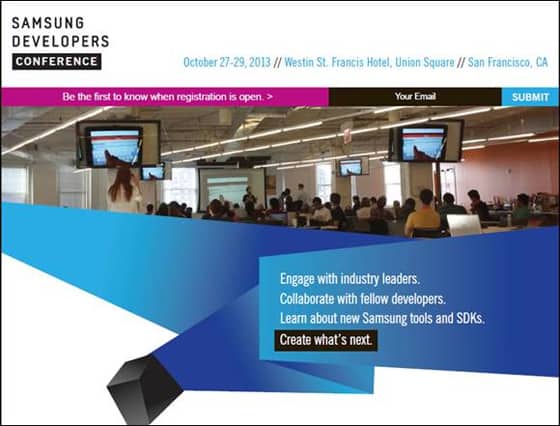 Samsung hasn’t given any indication that they want to leave Android as a platform. Sure, they have their own store and music hub and they replaced every app, but that doesn’t mean anything other than they want to make as much money as possible, which is what every company wants.

Samsung has a lot to lose by leaving Android, they would lose the entire ecosystem, not just Google apps like Gmail, Google Maps or YouTube, by losing access to the Play Store, they also lose all the other apps people use, like Instagram, Facebook, Angry Birds, Evernote, Candy Crush, Twitter and that´s just of the top of my head, just think of an app you use, and Samsung will drop it just by leaving Android. They would have to start all over, and we know that’s extremely hard to do, as proven by Windows Phone, BB10, Firefox OS, Ubuntu and the rest.

Amazon spent a lot of time building an ecosystem for apps and a store before forking Android, and they’re still small in the mobile world, Samsung has a lot invested in Android and they won’t drop that any time soon.

While Samsung might eventually abandon or fork Android, they will first have to create an ecosystem, and right now, the lack apps most of all and developers won’t waste time on a small emerging platform when the money is somewhere else. Why would they develop for Samsung when even Windows Phone has more market share than that.

Samsung would have to convince people into buying phones and tablets without an ecosystem, and today’s consumers are aware enough that they won’t fall for that. People don’t buy phones for their hardware, they don’t even buy them for their OS, people buy devices for what they can do with it and what they can install.

Google has very little to lose if Samsung leaves, HTC, Sony, LG and Motorola, along with manufacturers like ZTE or Huawei, would be more than happy to fill the gap and consumers would love it, those companies have great devices to offer, which were covered by Samsung’s marketing power. I would even venture to say that if Samsung walks away, the Android ecosystem will grow and improve much faster than today.