Samsung makes almost every piece of its smartphones and tablets, and one of the most important aspect of those devices is the processor. While most companies go for processors made by Qualcomm or NVidia, Samsung has its own in-house processor called Exynos which they design and manufacture themselves.

The Exynos line is among the best of the industry, it’s extremely powerful and Samsung has used them for their flagships for a long time ever since the Galaxy SII running a Dual-Core Exynos at 1.2 GHz to the latest Galaxy S IV with the Octa-core Exynos 5 5410 (at least in a few markets), which uses a Quad-Core 1.6 GHz Cortex-A15 and Quad-Core 1.2 GHz Cortex-A7 put together to utilize ARM’s big.LITTLE architecture.

Samsung Exynos tweeted today an image teasing the upcoming evolution of the Octa-core Exynos, most likely the 5420. The first Octa-core was announced 7 months ago at CES 2013 in Las Vegas, and it looks like the new one will be announced outside an event, probably with much less press than before, since this is just an evolution and Samsung doesn’t have any new devices to announce for now. 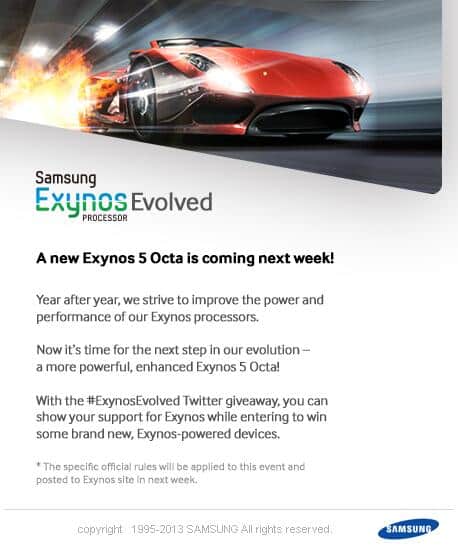 This could possibly be the processor of choice for the Galaxy Note III, which is said to be coming in September at IFA 2013. Of course, that’s only for the international version, since the U.S. versions always have a Qualcomm processor inside and the Note III won’t be the exception with rumors pointing at a Qualcomm Snapdragon 800 clocked at 2.3 GHz. The Exynos and the Snapdragon usually have almost the same performance, but the difference is almost not noticeable, since the Exynos is built by Samsung itself, it will most likely have better performance on their devices, but they’re both brilliant processors.

As we recently saw leaked, the Galaxy Note III is to be completed with a Full HD 5.7-inch super AMOLED display and a 13 megapixel camera with Xenon flash. Samsung has had great success with the Note line of devices, and the Note III is already shaping up to be a good device, so we can expect huge sales and an even bigger marketing campaign coming out of the South Korean manufacturer.