Here are some news for current and future Samsung Galaxy Note users. I mean current for those with a Note II and future for those waiting for the Note III to be launched.

In the case of the former, it appears that Samsung has decided to skip Android 4.2.2 and go directly to Android 4.3, which should be released soon, there’s been leaks of the Android 4.3 ROM for both the Samsung Galaxy S IV Google Play edition and the Nexus 4 so it can’t be that far off. This news come from Telstra, an Australian carrier, who’s update schedule has been updated with this info:

Samsung have elected globally to skip the 4.2.2 update for this device and will instead go to a newer version of Android. No schedule has been provided for this update.

While Telstra is talking about the Galaxy Note II 4G, we can expect the same behavior from Samsung to every Note II out there. 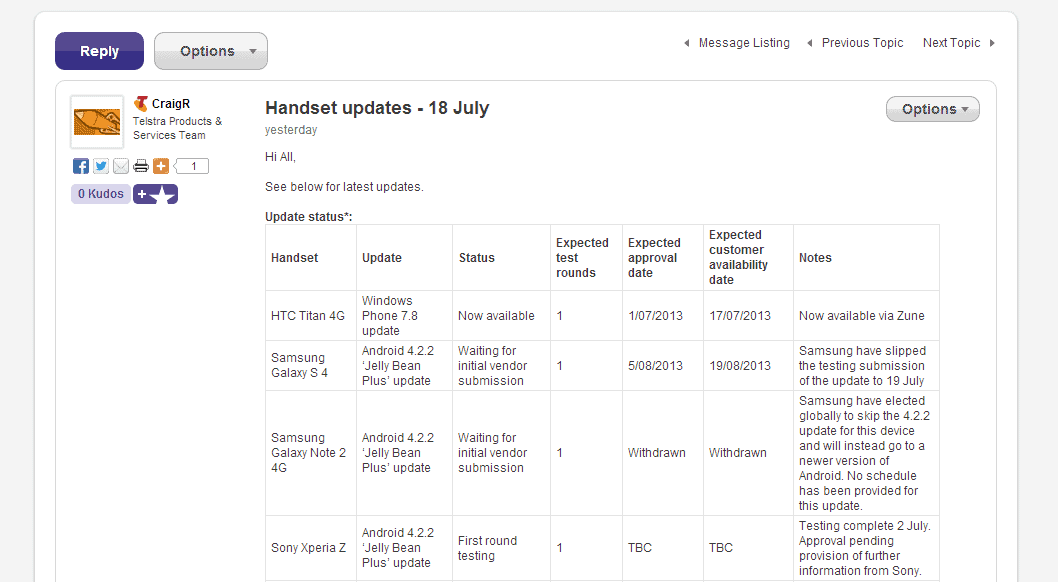 Currently, only the Galaxy S IV is running Android 4.2.2 on Samsung’s lineup, so we might see other phones skip this version as well, probably the Galaxy S III will go straight to 4.3 and makes things easier for both users and Samsung.

As for those waiting for the Galaxy Note III to be announced, it’s code made another appearance, this time in Picasa (why is Picasa still alive when Google moved everything to Google+?). A picture has appeared with the code SM-N9005 attached to it, and while the picture doesn’t say much, it’s one more thing that keeps us interested until the release of the device. The N9005 supposedly corresponds to the LTE version of the device, but nobody thought Samsung wouldn’t do an LTE version of the Note III.

As a reminder, the Note III will feature a 5.7 inch Full HD super AMOLED display with an Octa-core processor (most likely the Exynos 5 5420) clocked at 2.3 GHz and a 13 megapixel camera with a Xenon flash. The overall design of the device should be the exact same design of the Galaxy S IV, only bigger, as we know Samsung does every year with their devices once they settle for a design.