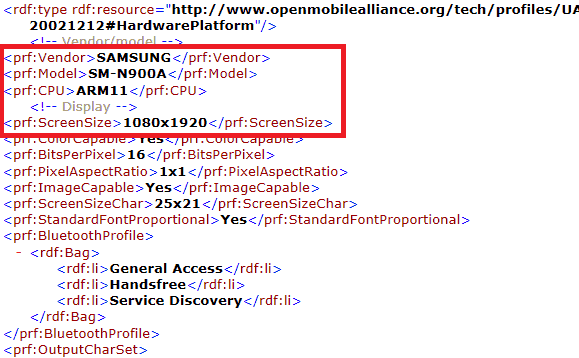 UAProf’s are always fun. It gives so little information other than the fact we know the device exists. It happens with just about every flagship device. There’s a device SM-N900A that we see in this UAProf (shown above) which also confirms that it’ll have a 1080p display (1920×1080 resolution) and will be running on an ARM processor. Like I said, lots of information here.

We’ve been hearing so much about the Galaxy Note 3 lately. We know it’ll have a display between 5.7 and 6.3-inches and it’ll be 1080p. It might even have a Snapdragon 800 or Exynos 5 Octa inside powering this beast. We could literally write a book with all the rumors that are floating around about the Galaxy Note 3. But we know it’s coming in early September, so there’s still plenty more rumors coming.

The UAProf did confirm the name, Galaxy Note 3, and it says ARM11 CPU. Which, again, doesn’t tell us much. Sometimes I wish these UAProf’s gave us the model number of the processor the device will be using. But then that takes out all the excitement when the device is finally announced, right? The SM-N900A is the same model number we’ve been hearing from other various leaks, so that part does sound pretty legit.