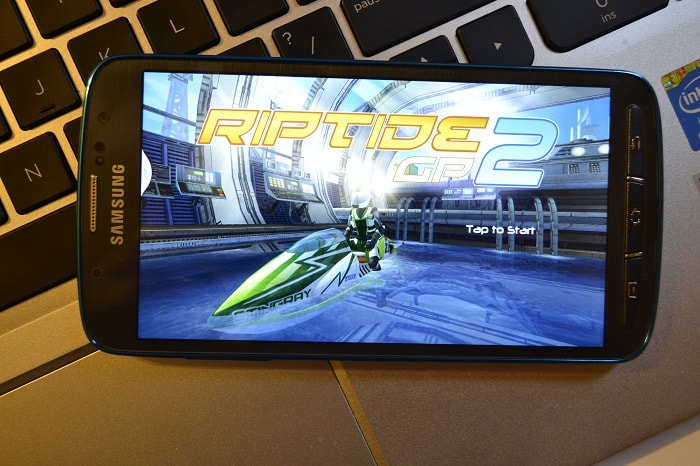 On Tuesday, amid all the Verizon, Motorola and Droid news, Vector Unit has pushed their next version of Riptide GP into the Play Store. RipTide GP2 is now available in the Play Store and early reviews are saying it's better than the original. Well I'd kinda hope it is. Riptide GP2 is on sale for $2.99, even if you bought the original, you still have to pay for the second version.

Riptide GP2 kicks the game into overdrive and features intense multi-player races, upgradeable hydro jets and riders, along with improved graphics and an all-new carrier mode, and a whole stunt system with dozens of new tricks. It features rocket-powered hydro jets racing around futuristic tracks across a dynamic and interactive water surface. Riptide GP2 is from Vector Unit who have made other great games like Shine Runner, Beach Buggy Blitz and Hydro Thunder Hurricane.

Of course, Riptide GP2 features support for Google Play Games. That shouldn't be a huge surprise since the original game was one of the first games to feature Google Play Games shortly after Google I/O in May. Riptide GP2 also features an all new watercraft and stunt system. In the new game you can unlock and master 25 stunts. It's all powered by the Vector Engine 4, which builds on the original game's stunning visuals with extra-detailed HD graphics. It's also optimized for Tegra 4, for those of you that actually have a Tegra 4 device.

Riptide GP2 is available on the Google Play Store now for $2.99 and it's a bit hefty at 46MB in size. And to no surprise, the game is sitting at an average of 5 stars for reviews. It already has 8 5-star reviews and it's only been on the Play Store for about 2 hours. You can grab it by hitting the Play Store button down below, and I'll be playing later.

How many of you are liking Riptide GP2? Let us know in the comments below.