We are all pretty familiar with LevelUp Studio. Even if the name doesn't ring a bell, their apps probably do. They've created apps like Beautiful Widgets, Plume for Twitter and PETI. On Wednesday, LevelUp Studio added another app to their portfolio. This one is called 'Quad Drawer'. We've seen third-party launchers before, but I can't ever remember seeing an app drawer replacement before. Quad Drawer does replace your app drawer, and it actually looks really nice.

Quad Drawer automagically separates your apps into four different categories. Those are Recent, Most Used, Last Downloaded and Alphabetical. They also allow you to quickly search for any app. You can keep the look of the large icons, or you can switch over to list mode, which shows the number of times you launch an application. The app also allows you to change the theme from light to dark, and turn the floating window launch on or off. The floating window launcher is one of the best and coolest features in this app. It's much like the multi-window tab that you can access on various Samsung devices from any screen. Except you can view your app drawer on top of any application. Sounds pretty cool right? 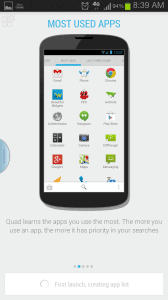 Additionally, long pressing on an app in the app drawer allows you to get more abilities like putting the app on the homescreen, app information, app uninstall, view in the Play Store or simply just launch the app. This is definitely an app that's going to take some getting used too. But it shouldn't be too hard to do. You can check out the video down below, which was created by LevelUp Studio to show you what exactly Quad Drawer does.

Quad Drawer is available in the Play Store now for about $0.99. It's sitting at about 2.1MB in size an has an average of almost 5 star reviews. But then it only has 15 reviews and 13 of those are 5-star reviews. LevelUp Studio has created some great apps, and I have no doubt that this is another great one.