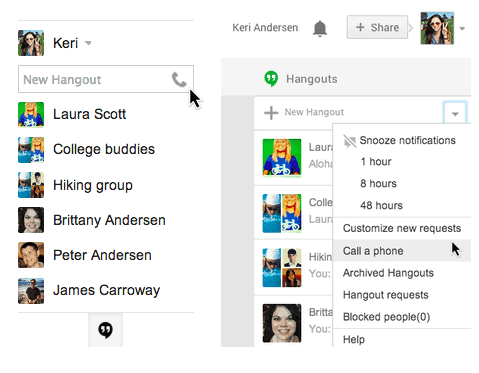 Back at Google I/O in May, Google announced Hangouts. Their new "all-in-one" messaging service. If you had upgraded from Google Talk to Hangouts, you probably noticed that the ability to make phone calls through your computer disappeared.

Thanks to an announcement on the Official Gmail Blog, the ability to make phone calls is back, or at least on its way. There's also a few other features coming in today's update as well. That includes Calls to the US and Canada are now free from all countries where Hangouts calling is available. And International rates remain very low. You can also add multiple voice and video participants to the same hangout, and Google has a few fun effects that you can add for fun too.

The Gmail team says that the update is rolling out to users over the next few days, so keep your eyes open and start making some phone calls. So next time Google decides to upgrade something they'll remember about the calls. If you want to know if you have the new version, just look for the new phone icon in the new Hangouts box in our gmail page. Or the "Call a phone" entry in the Chrome extension menu. So far it hasn't been enabled in my Gmail (neither my personal Gmail or my Android Headlines Gmail account). But I'll be on the lookout for it.

It's great to see Google still working on Hangouts and to see them bringing calling back is a great step. Hopefully this shows us the future of what Google Voice will be. Imagine having Hangouts and SMS merged. That would instantly give Google the biggest IM community around. And that's not necessarily a bad thing. Let us know in the comments what you think about today's update from the awesome people on the Gmail team.