The fact that the folks over at iFixit have no respect for any piece of tech and just crack open any device that comes to the market makes me love them even more. As a result of this “intrusions” we have in return a good sense of how the device is made, what’s in it, and how fixable it is if you happen to break it somehow.

The new Nexus 7, recently released by Google and ASUS just got the iFixit treatment, posing completely open to the camera showing us all the goodies stored inside. iFixit also assigns a number to every device, indicating how easy it is to repair something, with the Nexus 7 coming out with an impressive 7 out of 10 repairability score. The device is built pretty straight forward and doesn’t present any weird design for its components.

The new Nexus 7 has suffered a many changes when compared to the original, not only in shape and size, we already know it’s thinner, taller and narrower but also the texture on the back and the “Nexus” logo positioning, from portrait to landscape. Other things that have changed are the inclusion of a rear camera, dual speakers in three grills, one on top and two on the bottom (in portrait). 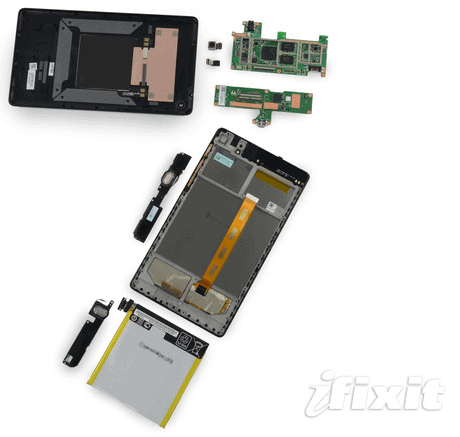 The tablet can be easily opened with a plastic prying tool, but that caused the back to crack a little, so you might want to do it carefully if you feel like cracking open yours. Once inside, you’ll find very little glue and you can just take it apart simply by removing the components one at a time.

You’ll find the battery first, along with the charging coil for wireless charging and to remove them you’ll have to void the warranty, since it’s protected by two seals, that have to be broken to set the pieces free, and “pretty sticky” glue. After that, both boards are easy to remove, with the rear camera right behind them. Finally, all you have to do is remove the speakers and the WiFi antenna, both easily accessed.

Some of the components found by iFixit include an Elpida J4216EFBG SDRAM, a Texas Instrument BQ51013B inductive charging controller, and an SK Hynix NAND Flash. 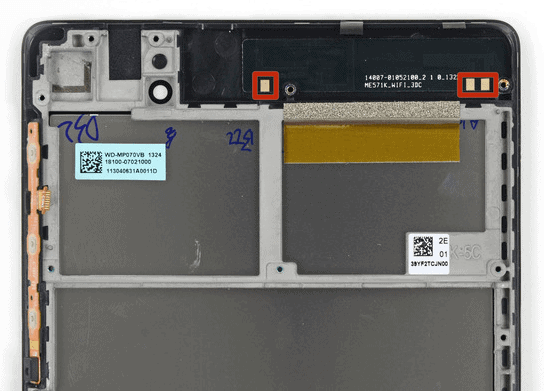 All the screws are Philips completing the picture for a tablet that’s pretty simple to open and repair, you do have to be careful with the rear panel and the battery requires a small struggle due to the glue, but nothing weird. The only downside is the front glass, where you’ll need a heat gun if you want to replace the LCD.

It’s nice to see that even such a nice piece of tech is built in a pretty standard fashion which can be fixed without too much trouble. Since so many people happen to be buying them, I’m sure they’re more than happy to hear this news.