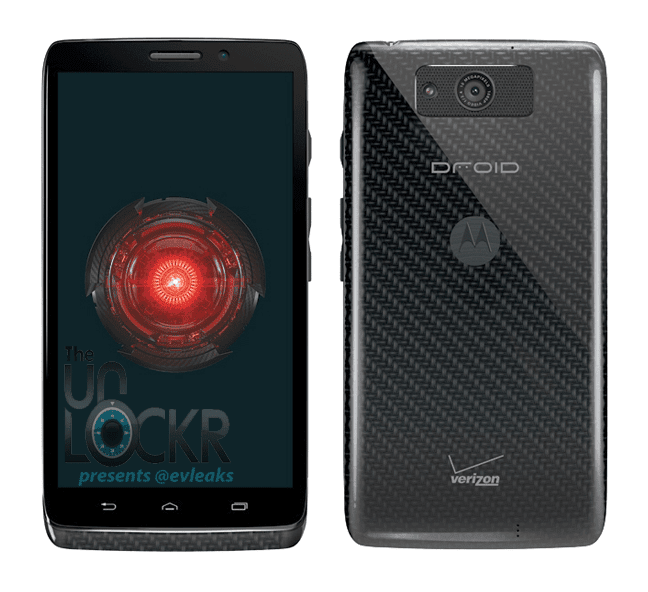 We just can't seem to get enough Motorola leaks today. Here's another one. This time of the new Droid Ultra that's headed to Verizon soon. The Unlockr and @Evleaks leaked this earlier today. It appears to be a press shot of the device's front and back. We've already seen the Ultra in White, but we've seen reports saying that the device would come in red and black as well. There is also a Maxx variant which is more than likely going to feature a huge battery.

What is interesting about the device is that there are no logo's on the front. And on the back you see the Droid, Motorola and Verizon logo. All relatively small. There's also no "4G LTE" logo which has been almost every one of their 4G LTE devices, including the Galaxy S4. You'll also notice the carbon fiber on the back and at the bottom of the front of the device. So it looks like the Kevlar coating is gone. Not like your phone could really stop a bullet anyways. But I'm sure a few people have tried.

The camera on the DROID Ultra might be a 10MP camera with the C sensor that is said to help establish white balance and exposure to create better photos no matter what your environment is. According to @Evleaks at least. He also assuming that the device will have a 5-inch 1080p display and run on a Snapdragon 800 processor with 2GB of RAM. Sounds pretty good for a high-end device, right? I kinda wish these were the specs of the Moto X.

It still seems a bit odd that Verizon is bringing the Droid Ultra, Mini and Maxx to their lineup along with the Moto X. I wonder which one will sell more? Probably the phone with the most marketing, right? So probably the Droid Maxx. Especially since people love the long battery in the Droid Razr Maxx and Droid Razr Maxx HD.

How many of you would grab this Droid Ultra if it were available today on Verizon? Let us know in the comments below.