According to ABC’s source, users will be able to select the casing color, trim color, receive custom engravings on the back of the Moto X, as well as having personal/custom photos installed to be the phone’s wallpaper. Customers will be able to do all of this through Motorola’s website that they are currently building for customers.

Through a website, buyers will be able to select from a palette of different colors. One color can be used for the back case and another can be selected for the trim of the phone. Users will also be able to engrave a name or message on the back cover as well as upload a personal photo through the site to be used as the wallpaper on the phone’s screen, according to people familiar with the rollout.

Their source also says that the Moto X will ship with Android 4.2.2 on board and it will also be heading to Verizon. Additionally, custom editions can be bought through the web, but the regular Moto X can be purchased in stores without any extra or custom features.

Motorola is also said to be working pretty hard on some unique sensors for the phone. ABC is reporting that the phone will be “smart enough” to know when the user is driving, automatically launching the speakerphone function when receiving a call. Users will also be able to simply flick the device to open up the camera app. Which makes it easier and faster to jump into the camera app.

Rumors and leaks about the Moto X are definitely getting interesting. But is this what we wanted from Motorola and Google? Let us know what you think in the comments down below.

Update: The custom color backplates for the Moto X have also just surfaced, as shown below. 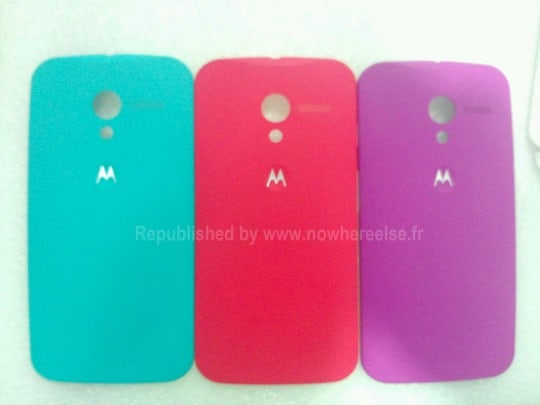