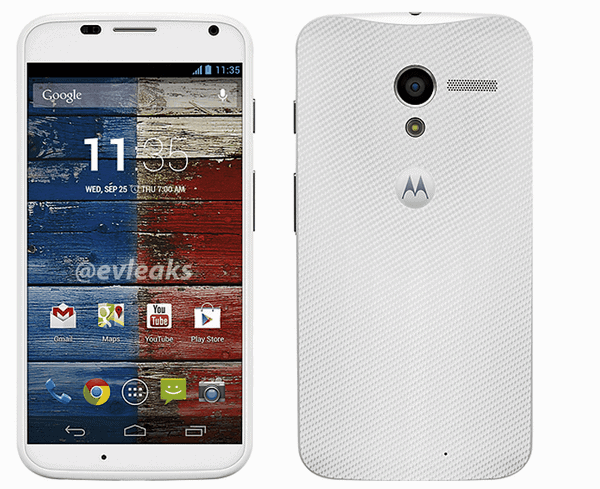 A report yesterday from AndroidHeadlines showed the Moto X in black along with its specs.  Later that same day @evleaks shared some more photos on Twitter.

With Motorola sending out invites this past week for their "Moto X" event on August 1st, we're going to have plenty of leaks and rumors coming out in the next week or two leading up to the event. But that's not too surprising, that happens with every hyped device, including the Samsung Galaxy S4, HTC One and LG Optimus G Pro. From recent leaks, here are the specs we are expecting to see in the Moto X. Remember these aren't official:

Even though the specs are not that great, it looks like Motorola is going to have some new features like giving you the option to choose your own colors and engravings as shown here on AndroidHeadlines. That is up to 16 colors, so you will have the opportunity to have a phone that doesn't look like everyone else's phone. I for one would like to see how well the hands free works.  A video leaked out earlier on YouTube, but it has since been removed from YouTube, shows many features including hands free commands.  There's also something about double twisting the phone to get to the camera, although that might be a little overkill to quickly access the camera. With three words, "Okay Google Now", or "Okay Moto Magic" you should be able to access all of the phones commands and features. As a driver who uses his phone all of the time while on the road, this is not just a neat feature, it is a safety feature. I know I could use this, how about you?