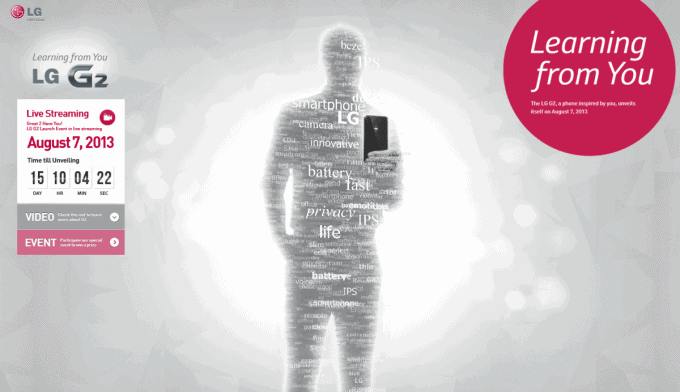 Right now, all eyes are on Verizon, Google, Motorola and LG. And in that order. Tomorrow we have the Verizon event, then Wednesday is Google's thing, and on August 1st the Moto X is unveiled and finally August 7th, LG has their event. Could LG have the last laugh? They just might. At least until the Galaxy Note 3 is announced.

Today, LG sent out some new invites for their August 7th event in NYC. They also posted a teaser video about the new LG G2. And no, it's not the Optimus G2, just the G2. I wonder what Google and HTC will have to say about that? The video talks about all kinds of stats about your life. Like 50,000 thoughts everyday, etc. So it doesn't really show off the G2, but it does show the tagline "Learning from you". So we're guessing some contextual awareness features like the Moto X?

Normally we just look for the specs of a new device, but I believe starting the Moto X and LG G2, we'll be looking more at the software and the features. Unlike the Moto X, the LG G2 is going to have flagship specs, but it'll also have some pretty cool features and hopefully some optimized software. As we know, the lag we see on many devices are all because of the software. And having the software optimized can really change the experience we have with our devices. I've noticed that a lot this year. Using the Galaxy S4 and the Optimus G Pro, the Optimus G Pro was much more fluid and they both ran the exact same chipset. Which tells you it's the software.

You can check out LG's video down below to see what's going on. But until August 7th, that's about all the information we have from Samsung's neighbor. Hopefully we'll learn more soon. What do you think about the LG G2? Is it going to be your next device?