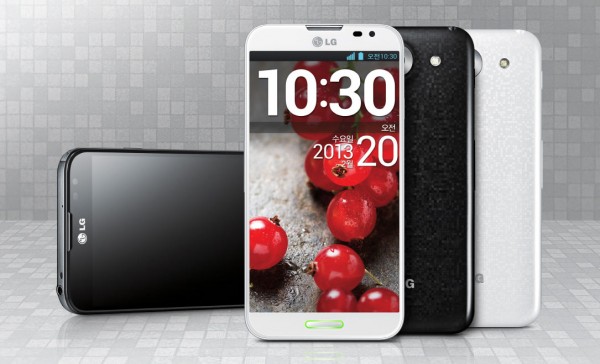 Over the past year or so these 3 companies LG, Huawei and ZTE have been aggressively fighting each other to hold the #3 position in the smartphone market after Samsung and Apple, and places between 3-5 have been traded among them. A year ago, Huawei was 3rd with 4.2%, and LG and ZTE were basically tied with 3.7%. Now LG is 3rd with 5.2%, ZTE is 4th with 5% and Huawei 5th with 3.8%.

I'd attribute LG's significant growth to 3rd place to the Nexus 4 launch. The Optimus G was a good phone, but I just don't think it would've made a huge impact on its own, and I think people would've passed it by much more easily, if it wasn't for the Nexus 4, because they still remembered the Optimus 2X, which was a phone that looked good on paper, but didn't work very well, and was quickly abandoned by LG in terms of support. So I do believe Nexus 4 changed a lot of people's minds about the quality of LG's devices. If they can keep up they can maybe maintain the place, and keep selling more units, too.

Huawei has been trying to make higher quality and more high-end phones, as it wanted to compete with Samsung. I don't think they're there yet in terms of quality or brand, so they'll need to work harder. They seem to have had a loss compared to the previous year, for whatever reason (could be branding).

ZTE has been growing, though, and it could be because they're still focused quite a lot on the low-end which means it's easier to sell more units. ZTE is making mainly a play for market share, and so far it seems to be working. 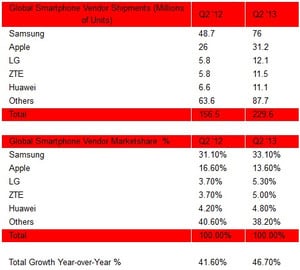 I'm not expecting these 3 to remain at the top forever, though. I think at least some of them will have to make room for Sony and Motorola in the future. HTC is still very unpredictable, and I'm not convinced yet that all of their new strategies will help them gain a lot of market share soon.

Motorola on the other hand is going to be helped by Google's marketing money, and technical influence in general, and the Motorola X phone and future devices like it will probably give it a huge boost in rankings, but we'll probably see even more of that next year.

Sony is also starting to look like it's going to launch some very high quality products on the market a few months from now, and who knows where that will lead them. I think it will definitely help their sales and revenues, but if they are really after market share, they'll need to keep a focus on the low-end, too, and I have indeed noticed they have some very decent Jelly Bean low-end phones, so they are doing some right things there.

I don't think Apple will be holding the #2 position much longer, and they've already dropped from 18-20 percent about 2 years ago, to 13 percent now. I think we'll see another Android OEM as #2 relatively soon (next year or so), and that might be Motorola if they do everything right, and start focusing on the global market once again. Expect the whole top 5 to shuffle a lot over the next couple of years.