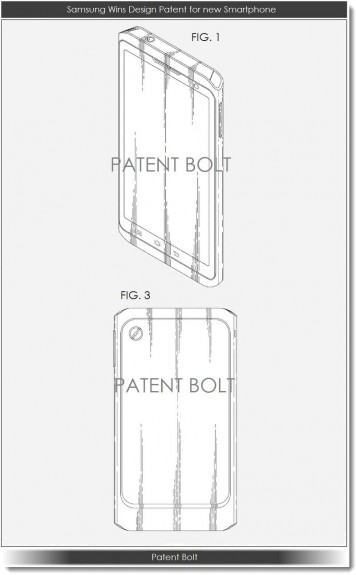 Yes it's time to hear about some Galaxy S5 speculation. Samsung has just been granted a patent for what appears to be their next Galaxy S flagship device. Now we've heard some inside reports from Samsung that they are worried about their build quality, especially when stacking up to HTC and Apple. So we figured Samsung might be ditching the plastic and going with some more premium materials. Personally, I'd be okay with Polycarbonate on the Galaxy S5, as it does feel very premium and is still plastic.

This evening, Gotta Be Mobile is reporting that the image above is the "All-Aluminum Galaxy S5" now I'm not sure that it's going to be completely aluminum, they might use another material. But this is a patent for a phone that Samsung has filed for and have been granted. We still have some time before the Galaxy S5 is announced, so we'll definitely be seeing many more reports surfacing soon and rumors as well.

So far, no other details are known about the Galaxy S5. Heck, Samsung might even change the name to something else. Who knows, it's way to early to be seeing rumors, leaks and even patents regarding the Galaxy S5. Personally, I hope this is a patent for the Galaxy Note 3, which is due to be announced next month in Berlin.

When Samsung announced the Galaxy S4 back in March in NYC, many criticized the company for using plastic again. I'll admit I was one of them. But I'll also say that after using both the Galaxy S3 and Galaxy S4 that the Galaxy S4 feels more premium than the Galaxy S3. Now would I rather an aluminum Galaxy S4? Of course, the HTC One feels great in my hand (don't get me started on those speakers). Hopefully Samsung can take a page out of HTC's book for the Galaxy S5.