2012 saw HTC and Samsung launch very different line-ups with HTC launching the One X, the One S and the One V at sizes of 4.7, 4.3 and 3.7-inches. Samsung meanwhile kept it simple with the Galaxy S III and the S III Mini at 4.0-inches. This year however, Samsung is taking a leaf out of HTC’s book, launching a Galaxy S4, a Galaxy S4 Active, a Mini and a Zoom, while HTC has just the One. There’s a Mini version of the One but, now leaked documents have let slip that there’s also a “Max” version coming as well.

We’ve already seen the face of the HTC One Mini with a 4.3 inch screen (can’t believe we’re calling 4.3-inch mini) and now we have confirmation of the name, thanks to documents from O2 Germany leaked by Mobiflip along with its big brother, the HTC One Max (we know it by the codename T6) which is expected to be a 6-inch device.

If the Max in fact carries a 6-inch screen, it would be placed right in the middle of the supersize phones competitions between the Sony Xperia Z Ultra and the Samsung Galaxy Note 3, whose screen hasn’t been announced yet but it’s rumored to be 5.9-inches. 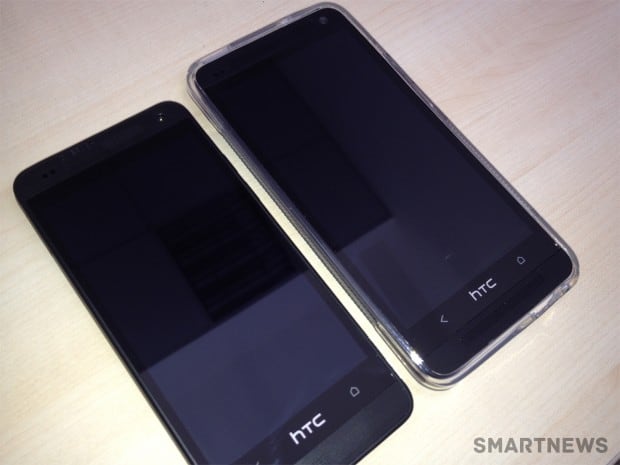 If we remember the rumored specs for the Mini, it’s supposed to carry a Qualcomm Snapdragon 400, 720p screen and Ultrapixel camera like the rest of the Ones. Except for the camera, the internals are pretty much the same as the HTC First, which was a pretty good phone if you’re not counting the Facebook home fiasco (don’t forget that the device has already been discontinued).

The market has been asking for a smaller high-end device for a while now and this looks to be the best of its size, since the biggest competition comes from the Samsung Galaxy S4 Mini which only has a qHD display versus the HD Display to launch with the One Mini.

The HTC One Max will probably be on the other end of the scale, with a Snapdragon 800 and a 1080p screen, putting it on par with its competitors from Sony and Samsung. The Mini will be available in both black and silver options while the Max is only listed in silver, for now.

What we don’t know is either pricing or carrier availability, HTC has managed to get its flagship device on all four major US carriers without any modifications, but these are not flagship devices but an expansion of the line-up, so we’ll have to see how and where HTC gets these devices into consumers hands.