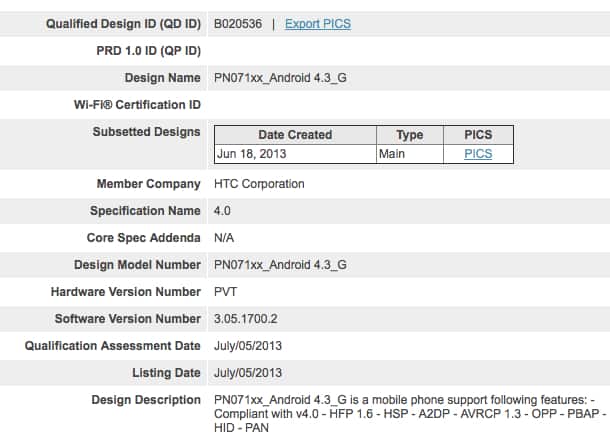 By now, I've almost lost track of the amount of devices that have gone through the Bluetooth SIG running Android 4.3. There's been a Nexus 7, a device we believe to be the new Nexus 7, a Galaxy Nexus, and the list goes on. So far Google hasn't announced Android 4.3, but we have seen it on some Google Play Editions of the Galaxy S4.

The documentation from the Bluetooth SIG shows that the HTC PN071xx_Android4.3_G was certified on July 5th. I'm actually surprised anyone at the Bluetooth SIG was working the day after the fourth of July, am I alone in that?

Anyways, PN071 is indeed the model number for the HTC One, and the G at the end is more than likely for the Google Play Edition. Especially if we look at the Galaxy S4 GPe, which is the I9505G. We are fairly sure that Android 4.3 is the next version of Android coming from Google, but we still have no idea when it's coming our way.

The HTC One and Galaxy S4 Google Play Editions are shipping on Tuesday, July 9th, and they went on sale June 26th. So later this week, people should start getting their hands on these devices. It'll be interesting to see if any devices for consumers end up with Android 4.3 out of the box. Some reviewers already got Android 4.3 on their demo units of the Galaxy S4 GPe.

Android 4.3 is expected to bring Bluetooth LE support. So it makes sense that all these devices are passing through the Bluetooth SIG. But where is our update? In fact, I even did an editorial earlier this week wondering where our refreshed Jelly Beans are and where is our Nexus 7. Hopefully Google will have answers for us shortly. I'm starting to get bored of writing about Android 4.3 when it's not even announced yet. I'm sure our readers are getting bored of reading it, right?

Anyways, we're hoping we'll know soon enough when Android 4.3 is available and what all the changes are. We'll be keeping our eyes open as usual to see what we can find.