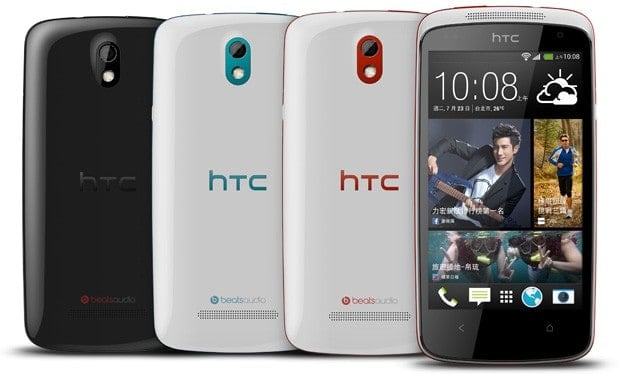 At the high-end level, HTC's devices are quite competitive in prices. For example, in US, the HTC One sells for $600, as does the Google Play Edition, both with 32 GB of storage. Meanwhile, Galaxy S4 unlocked and the Galaxy S4 GPE, both cost $650 – with only 16 GB storage.

So no problems for HTC's competitiveness at the high-end. The mid-range and low-end is a different matter, though, and has always been HTC's weak point ever since they've adopted Android. Their phones have always been $50-$100 more than the competing products that used identical or even better specs, and it looks like they still keep on doing it.

The new Desire 500 has a 1.2 Ghz quad core Snapdragon 200 processor, which is based on Cortex A7 cores, and Adreno 302 GPU (my guess is it's about half as good as Adreno 305, or around Adreno 220 level (maybe slightly weaker than that). The GPU should support WXGA (800×480) and 720p resolutions in mid-range phones, starting with later this year.

Even if you try to account for higher prices that are typical in countries outside US (where a subsidized Nexus 4 or a Motorola X would make much more sense anyway), that still doesn't seem like a very competitive price, and you should be able to get at least something like a Galaxy S2 for the same price, that has more storage, better performance with Cortex A9 (in most single-threaded apps) and possibly even a better camera.

HTC has recently announced that it will start a new Emerging Devices division, and with a new boss to lead it, maybe future devices will be a lot more competitive on price, but I wouldn't expect this to happen until next year. So far, HTC is still mainly focusing on the over $300 smartphone market, and they need to focus on getting more market share and putting their phones on more people's hand, by making even $100 smartphones, with single core 1.2 Ghz Cortex A7 CPU's.

With Android 5.0 just around the corner, and supposedly being better for low-end devices with 512 MB of RAM, HTC should be able to still make what they think are "quality devices" but for much lower prices, and for people who can't really afford to pay more for a phone.