Skip to content
Trusted By Millions
Independent, Expert Android News You Can Trust, Since 2010
Publishing More Android Than Anyone Else
50
Today
50
This Week
805
This Month
3805
This Year
121415
All Time “Hey yo Google, where’s my new Nexus 7?!” is what I imagine a lot of people were thinking as they watched this year’s I/O conference live on YouTube and when they read the headlines after the event came to a close. There’s no denying that the new Nexus 7 – whatever they might call it – is a hotly anticipated device. After the runaway success that the first device became, it’s no surprise that there’s large demand, finally we had an Android tablet that seemingly ticked all the boxes. It was priced brilliantly, built okay, had one of the best displays of the time and best of all it was a Nexus. I’ve got one – in fact I think most, if not all the staff here have one – and I love it but, am I crying out for a new one? Not really, no.

A lot of you are though, and it’s understandable – it’s priced so low that buying a new one every year isn’t too much of an issue, if an issue at all. We’ve heard quite a lot about this upcoming Nexus already and it’s getting to the point now where we just want the damn thing to show up. One Reddit reader was feeling the same and so he went ahead and asked ASUS tech support about the elusive tablet. Below is an image of what he claims to be the response from ASUS tech support: 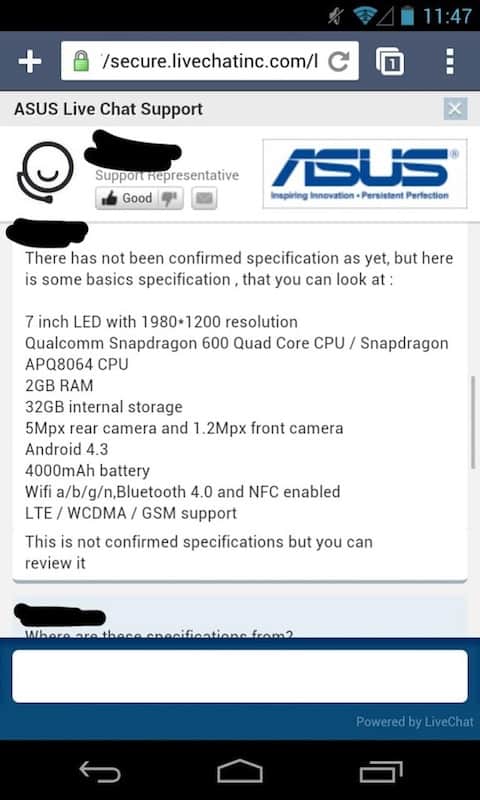 The English used in the response seems a little off to us, and we’d hope that ASUS employees had a better grasp of syntax than the above employee but then again, we’re not sure where in the world this is coming from. The Reddit reader goes by the alias of “iopjklohyeah” and we’re really not sure whether or not to believe him but, judging from his poor attempt to scribble out information, this doesn’t look like an experienced faker by any means. What do you think? Let us know in the comments below.