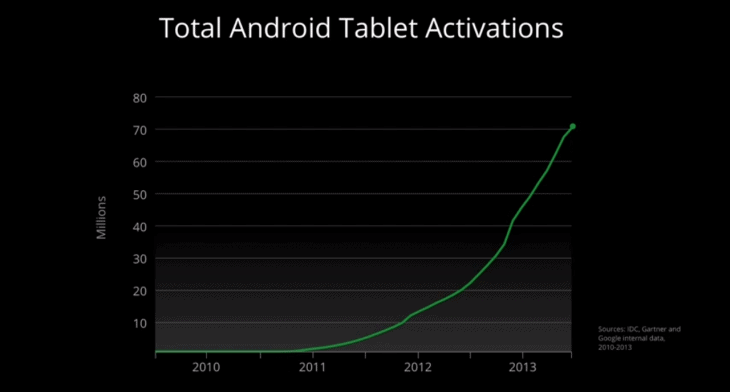 Google’s event today was all about the new Nexus 7 and the content that we all love to enjoy on Android and from Google’s universe. Of course, whenever Google host an event like this, there’s always going to be a little bit of time devoted to chest-beating through statistics. This time around, the stats focused on tablets and how Android tablets are gaining a hold in the market. The above graph shows that in the last three years Android tablet activations have soared and they now sit at a fairly impressive 70 Million activations worldwide.

Sundar Pichai, head of Chrome, Apps and now Android, took to the stage to share the impressive stat that out of every 2 tablets sold, 1 of them is running Android. That’s just for the first half of 2013, and somewhat disappointingly he went on to say that the Nexus 7 “makes up at least 10% of all Android tablets sold.” Still, this is progress and that’s exactly what Android on tablets needs, is to keep on progressing and gaining a hold in the market.

While Google is often criticized for launching products in the US long before anywhere else, the Nexus 7 has enjoyed some sort of international success and Pichai was able to reveal that the Nexus 7 was “”the single highest selling tablet in all of Japan during the holiday season.” That might not sound too impressive but, the Nexus 7 was late to the party in Japan and the market over there is incredibly crowded, there’s some great tablet hardware from Japanese stalwarts such as Sharp and NEC. This also means that Google’s Play Store is doing much better overseas than it previously has been.

So, there you have it folks – Android tablets are definitely on the rise and there seems to be no slowing them down. We just hope that the new Nexus 7 – which is an impressive little beast – can continue the success that its original kickstarted.