One of Android 4.3 new features is the removal of a feature. Wait a minute….what? Google has removed a feature in the Android 4.3 update and that’s a good thing, because they’ve moved it to the Google Play Services.

With Android 4.2, Google introduced a feature called Verify Apps, which made the system scan every app at the moment of install, either from the Play Store or if you sideloaded an APK. This all happens on your phone, there’s nothing on Google’s server with this, unlike the “Bouncer” in the Google Play Store that checks apps when they are uploaded by the developers. 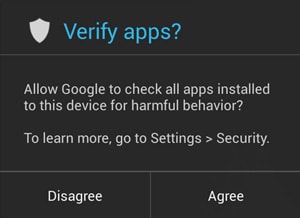 So, Verify Apps is now part of Google Play Services, but what does it mean? It means that before, you had to be running Android 4.2, which is only 5.6% of devices according to the latest Android Distribution chart, but now every phone that has Google Play Services installed has the Verify Apps feature, and that is everyone with Android 2.3 Gingerbread and up which adds up to 95.6% of total devices, not a bad move if you ask me. In one night, Google made 90% of Android devices more secure. As always, you can opt out of the Verify Apps feature from the Settings menu.

This proves how much Google is thinking about security and fighting malware, in Android 4.3 Google made a lot of changes to how the OS works including SELinux and the /system partition is now more secure. Of course, this broke the root access everyone had, but both Chainfire and Koushik Dutta (responsible for SuperSU and Superuser, respectively) already have a new solution and most of you are already running Android 4.3 with root.

Google Play Services has become Google’s new best friend and I think this move is a new trend that Google will pursue, by moving features from the core system to the Play Services, they can reach a broader audience much faster, they can be updated more often and most importantly, new features won’t depend on the OEMs updating their devices. Google will handle everything and new releases of the OS will only be for major improvements and fixes, similar to what Android 4.3 is.

Android is more secure than ever, so if you ever happen to read a fear-mongering article or post somewhere, make sure it’s a valid security concern and not some uninformed comment. Google is making it really hard for Android devices to get infected, and if they do, it’s probably because the user did something wrong.