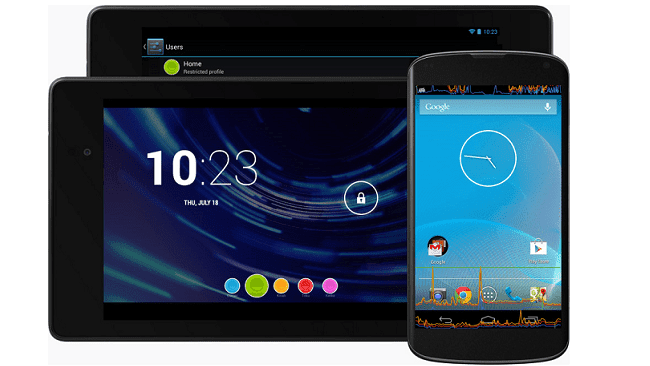 Dan Morrill, a Google engineer, took to Reddit to explain why we can't get the multi-user mode on our phones, too, and not just on tablets:

"Suppose you have device sharing enabled and then a call comes in. Who gets it? Do you punch through to the current user? Only the owner gets it? If only the owner can answer, does it ring for the second user? Is it worse to annoy the current user with a ringing phone they can't answer, or worse for dad to miss a call from his boss because Junior was playing Angry Birds?"

What he's saying is that user research has shown that people get confused about who gets to respond to the call, if the phone rings. If you did have multi-user mode, but just one SIM, there's just no way around that. The phone has to ring, and it will appear to whoever is using it. Hiding it for later for the inactive user doesn't work for calls.

Dan Morrill suggests that they will keep working on this, and maybe they will put it in phones in the future if they can find a good and simple solution for this. Until then, they will probably enable the feature in AOSP, and perhaps ROM makers will be able to find a solution first, and then Google will be able to "get inspired" by that idea.

I think the multi-user mode is one of the features that gets Android closer to a full desktop OS, although we're still in the early days, but I expect more features like these, such as multi-windows or some similar multi-tasking system, and perhaps an interface that is slightly more optimized for desktop use and larger screens, too.

I'd certainly like to see some of those features in Key Lime Pie, especially with OEM's starting to make more hybrid devices and more Android notebooks in the future. It will all depend on how much Google wants that, and whether they will slow Android down intentionally so they can push Chromebooks more, or not. But from Google's recent moves, I think they're going for the "let a thousand flowers bloom" strategy once again, and will be doing many of these things at once, and see what works best.