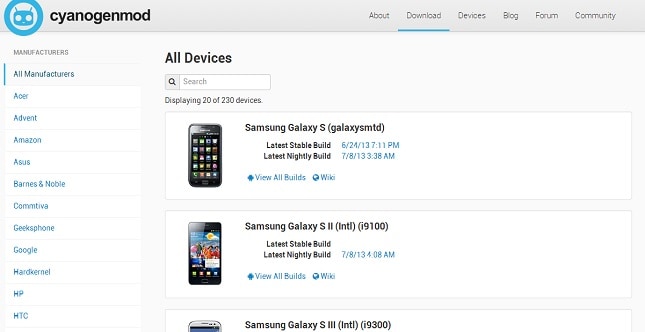 A popular topic as of late has been CyanogenMod and what new feature they are working on now. It seems every time we turn around, CM has added a new feature into their ROM. I just think they are bored and waiting on Android 4.3. But they have revamped their download site, get.cm. The old version of the page wasn't terrible, but it wasn't the most intuitive either. Even the developers at CyanogenMod called the old version of the page "jarring", which is cool to see them being honest.

The download site lists over 200 devices on the left side and even more are being added as they come out. The new version of the page allows you to select your phones manufacturer on the left, which then lists the names of all the devices supported by CyanogenMod from that manufacturer. For instance, clicking on Google brings up the Galaxy Nexus, Nexus 4, Sprint Galaxy Nexus, Nexus 7, Nexus One, Verizon Galaxy Nexus, Nexus 7 3G, Nexus 10, Nexus S 4G, Nexus S and the Nexus Q. From there you can click on "view all builds" for your device. Which will show all the latest builds. That includes nightlies, stable and even M releases. Speaking of which, we should see one of those soon.

As we said the new version of the site is much improved and its definitely much faster, which is always something we love to see. Right now the new download site is in beta and located at beta.get.cm. Hopefully we'll see it become the main get.cm site really soon. We all know we're going to love it. But with CyanogenMod, things stay beta for quite some time. Which isn't always a bad thing.

How many of you head to CyanogenMod's site to get new builds of CM for your device? How many of you think this update is a major step in the right direction? Let us know in the comments below.