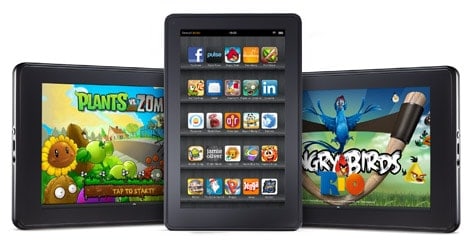 Amazon has been making Kindle Fire's for a couple of years now. Back in 2011 they introduced the original Kindle Fire for $199, which then led to Google's Nexus 7 at $199 in 2012 and a ton of other 7-inch tablets hitting the $100-200 price point. Last year, Amazon decided to add even more tablets to their Kindle Fire line. They brought in some HD versions and larger versions as well. Not to mention the LTE version of the Kindle Fire HD.

Now it looks like BGR has scored an exclusive on the spec sheets for their new Kindle Fires coming out this fall. Beginning with the 7-inch Kindle Fire HD it'll be featuring a 1920×1200 resolution display like the Nexus 7. But it'll be powered by the Snapdragon 800 processor. Prototypes are said to be clocked at 2GHz. The new 7-inch Kindle Fire HD will also feature 2GB of RAM, a front-facing camera, Wi-FI and cellular connectivity. We're guessing LTE and HSPA+ depending on the carrier and region. It'll ship with 16GB, 32GB and 64GB of internal storage. But it'll be running Android 4.2.2 – Jelly Bean with plenty of customization from Amazon.

Looking at the 8.9-inch Kindle Fire HD, the specs will be very similar to the 7-inch model, except for the 2560×1600 resolution display. It'll also have the Snapdragon 800 processor, 2GB of RAM, with the same front-facing camera and a 8MP camera on the back along with 16GB, 32GB and 64GB internal storage sizes. It'll also have optional cellular data support.

Since the Kindle Fire line has been launched around September both in 2011 and 2012. We're expecting that Amazon will announce it either late August or early September and put them on sale within the coming weeks. Knowing how Amazon prices their tablets must really have other OEMs scared. Putting a 1920×1200 resolution display and a Snapdragon 800 processor in a $199 tablet is just amazing. If this were a few years ago, this tablet would be around $500. These specs almost make me want to buy a Kindle Fire!