If you’ve ever used the stock Android camera from any device running stock Android, you know just how terrible it can be.  There’s a significant lack of features when comparing it to an OEM-skinned device like the HTC One or the Samsung Galaxy S4, and for whatever reason it just doesn’t work as well either.  Thankfully the CyanogenMod team is here to put an end to all your worries if you prefer the Android Open Source Project (AOSP) stock Android experience.  As part of the CyanogenMod 10.2 (Android 4.3) upgrade the CyanogenMod team will be baking the new Focal camera into its nightly builds, and it promises this will be happening very soon.  For those that haven’t had the CyanogenMod experience know this: the team is working on becoming the best custom ROM experience out there, dedicated to remaking entire sections of the Android OS for the better.  They’ve started a project called Nemesis which they teased just last week, and unveiled 5 days later.  What we didn’t realize up until now was the Focal is only part one of the Nemesis project, which is aimed to deliver a full OS experience much like what you would find from a manufacturer like HTC or Samsung, but of course without all that famous bloat hogging up your device’s resources.

While we detailed quite a bit of Focal when the CyanogenMod team announced it, one of the CyanogenMod developers Guillaume Lesniak has given a complete rundown of the app.  One of the biggest differences in Focal versus the stock AOSP camera is the user interface.  While the AOSP camera is very simple and offers navigation based on a pop-up menu, Focal features a slide-out sidebar with floating widgets.  All Android users should be familiar with widgets, as they are prominently featured right on the home screen.  Focal’s widgets feature the camera’s settings and parameters, and you’ll be able to reorder or close any settings you don’t need to see at any one point in time.  This experience is similar to what Samsung or other OEMs offer on their screen, albeit with many more options than those camera UIs provide.  Rotation doesn’t affect the placement of the widgets, so there’s no annoyance of figuring out where the widget you wanted to use went off to when rotating. 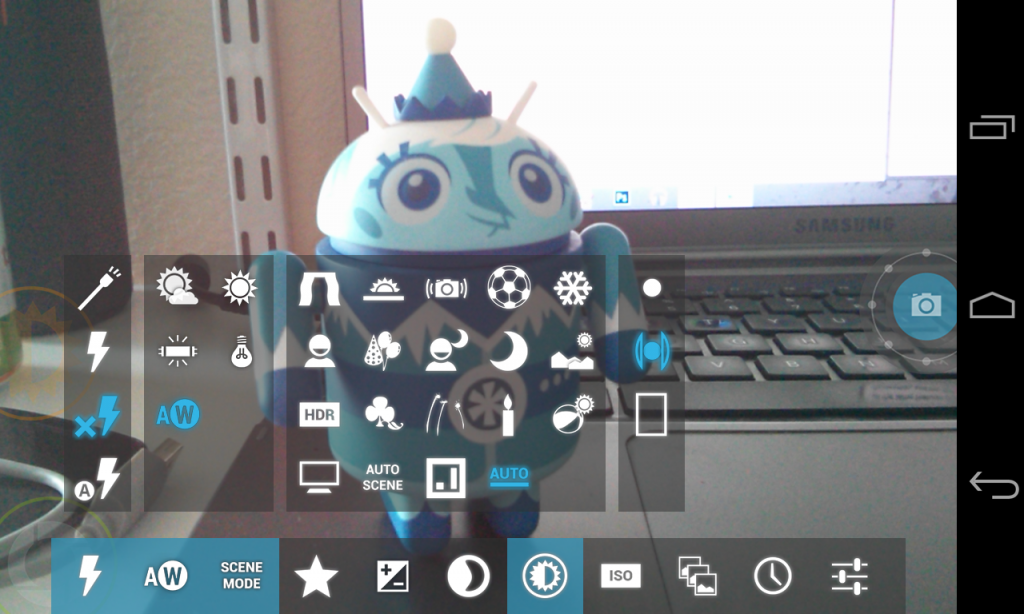 Speaking of focusing, Focal has a bunch of different options for that.  There’s Quick Capture Mode (Moto X mode) that allows you to take a picture by tapping anywhere on the screen to focus on a point and then immediately snap a picture.  Timers and voice picture-taking are also included, so if you like to take group shots or maybe even just shots of yourself you can enable either feature, so if you prefer to say “cheese” instead of waiting for a timer to countdown you can always choose that.  Burst mode is also included, and gives the option to take 5, 10, 15 or even an unlimited number of pictures as long as the shutter button is held down.  This allows for capturing the perfect shot, or even capturing fast motion shots.

Focal also introduces a new way to meter light.  Often when taking pictures your subject becomes too dark or too light depending on the light source either in front or behind the subject.  Focal introduces a metering ring, which takes light from around the ring of focus and attempts to normalize it.  There are a few different modes including frame average, spot metering, and weighted point depending on the hardware supported on your specific device model.  You’ll also be able to take pictures while taking video by double tapping the screen at any time.  This used to be a feature only available on the higher end phones out there, but now will be made available to any phone running Focal. 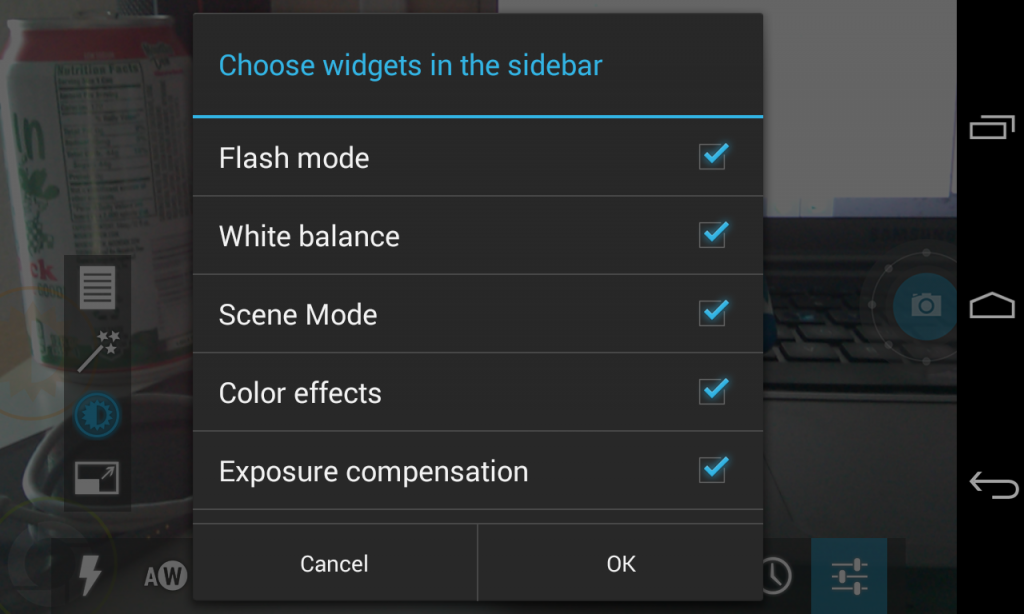 Another UI enhancement of Focal is the review drawer.  Many cameras force you to go in to a completely different Gallery app to view whatever photo you’ve taken.  This is the iPhone method, and like a lot of things in iOS it’s not exactly the most efficient way to do it.  Focal takes Android’s notification concept and creates a Review Drawer for the pictures you’ve taken.  Instead of having to view a full-screen image of what you took or opening a separate app, you just swipe from the left or top (depending on orientation) to reveal the drawer.  The drawer features a few thumbnail sized pictures rather than a full size one, letting you review more than one shot at a time.  This provides a quicker, more efficient way of reviewing your photos than other concepts out there.

There are also a lot of back end software enhancements in Focal that aren’t necessarily seen by the user.  Panoramas are better than ever, with the ability to not only take 360-degree panoramas, but panoramas are also shot in higher resolution than before.  The software HDR included in the previous CyanogenMod cameras was good, but Focal’s software HDR is better.  Instead of taking two back to back shots and hoping that you didn’t move at all, Focal’s software HDR matches up two shots before processing them.  This ensures that you won’t have extra-blurry HDR photos, however the team is warning that this method incurs a bit more processing time.  Google’s “auto-awesome” is also included in Focal, and the CyanogenMod team is promising that photos will be auto-enhanced in your gallery no more than 5 seconds after taking the shot.  This is great because you won’t have to wait for your photo to be uploaded to your Google+ backup before receiving enhancement. 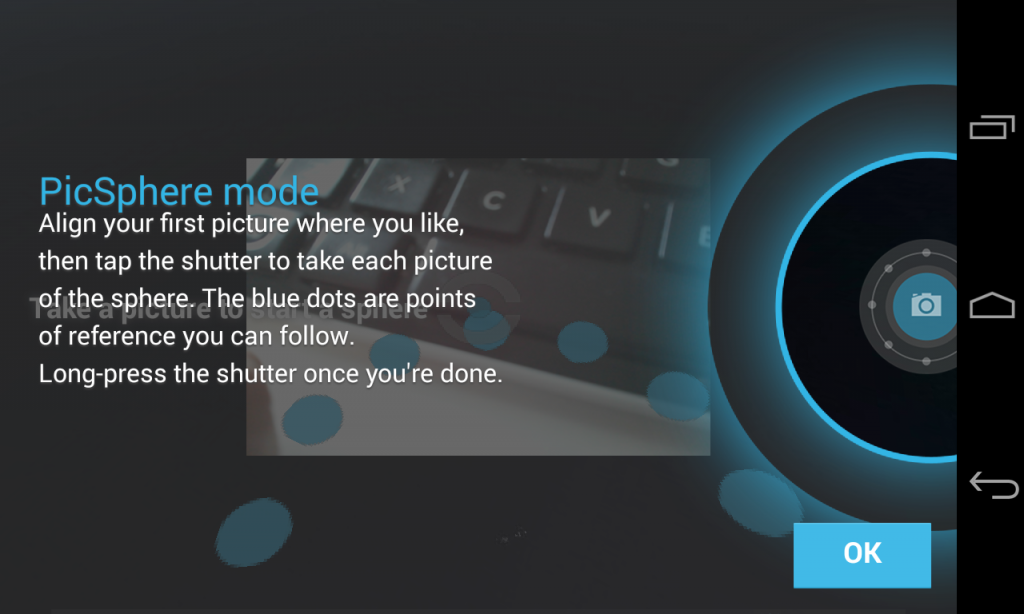 Last but not least is PicSphere, the CyanogenMod Team’s answer to Google’s PhotoSphere.  The biggest problem with Google’s PhotoSphere is that it’s closed-source, meaning only device with official support can use it.  We found that out when the new AOSP camera leaked and PhotoSphere still only worked on a few devices out there rather than everything.  PicSphere is supposed to do the same thing PhotoSphere does, by taking a 360-degree panorama including your feet and the sky.  This creates an orb that you view from, and can be most easily experienced by jumping into Street View in Google Maps.  Since PhotoSphere uses the same technology as Street View, you’ll have a great idea of what PicSphere will be doing if you haven’t used PhotoSphere yet.

Mobile cameras have come along way, and as such the software needs to continue to advance.  The CyanogenMod Team clearly has the answer in Focal, and we’re expecting it to continue to improve over the coming months and years.  Much like everything the CM team does, Focal will be fully open-source and available to other developers out there.  It will be publicly available very soon according to the team, and will ship with the latest nightly builds of CyanogenMod 10.2.  As always we’ll keep you informed when this does happen!