We're not so sure about you guys but, this is pretty hilarious when you think about it. Not only has the New Nexus 7 been leaked like crazy this past week but, it's now available for you to pre-order. Before it's even officially announced, that's right. So, for all of you that have been saying "take my money!" well, now Best Buy and Sam's Club will. It's available over at Best Buy for $229 and $269 for 16GB and 32GB WiFi models, respectably.

Obviously, there's no information on being able to pick it up in store just yet but, it's pretty funny to see it up for pre-order already. As Droid-Life notes, it's also available to pre-order from Sam's Club as well. 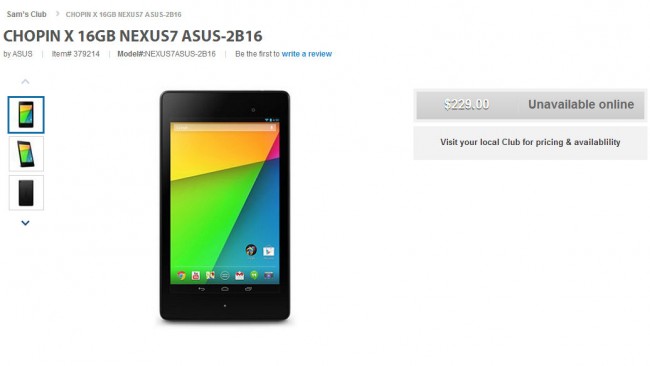 It's the same price at Sam's Club but, it's now saying that it's unavailable offline for us, so who knows. Also, we now have official specs for the new Nexus 7 as well, as Best Buy has helpfully let these out of the bag. Let's take a look at the specs below:

So there you have it folks. The new Nexus 7 is pretty much a dead-set for reveal later on today and, we'll be watching closely to make sure that we bring you all of the news, including the latest on the new Nexus 7 that we all know everything about. While the device is available to pre-order at Best Buy, I wouldn't pull that trigger just yet – we have no idea if Best Buy will honor these pre-orders and hopefully Google has learned their lesson when it comes to retail availability of their devices after the whole Nexus 4 thing. We're pretty certain that Google and ASUS will have a lot of stock on hand, and if the device goes on sale today, well you had better have your credit cards at the ready and a whole lot of patience.


Advertisement
Trusted By Millions
Independent, Expert Android News You Can Trust, Since 2010
Publishing More Android Than Anyone Else
25
Today
144
This Week
399
This Month
5143
This Year
106618
All Time
Advertisement