Who doesn't love some karaoke? With this new app, Sing! Karaoke, you can sing your favorite songs from a large catalog of top hits, or perfect a song and you can then share it with any and every one in the world. The audio technology from Sing! works on many of the newer flagship devices. The devs include the Galaxy S3, Galaxy Note 2, Galaxy Nexus, Nexus 4, Nexus 7, Nexus 10 and many other high-powered devices. 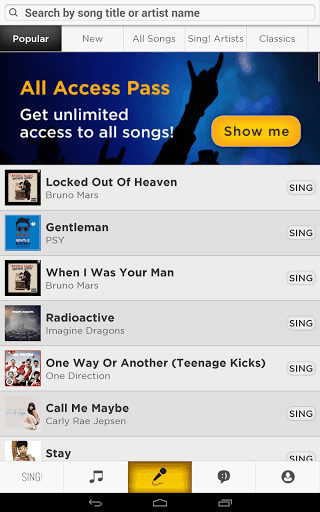 With Sing! you can choose from the huge catalog of hit songs from Pop, Rock, Hip-Hop, Musicals, Country, Classics and everything in between. They are constantly adding new songs to the app all the time, while keeping the app free. You can also earn free currency to sing premium songs, or buy a subscription for unlimited access. 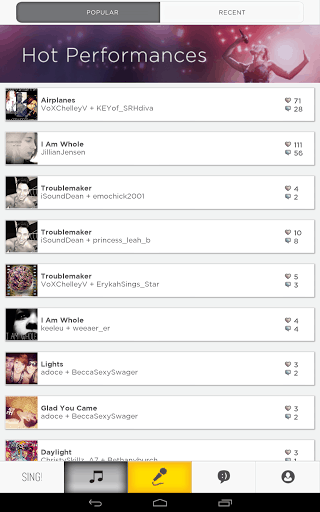 The songbook inside Sing! includes many of the most popular songs like Gangnam Style by Psy, Stay by Rihanna, Give your Heart a break by Demi Lovato, and many others by Bruno Mars, One Direction, Austin Mahone, Carly Rae Jepson, Selena Gomez, Lady Gaga, Carrie Underwood and so many others. Their song book is very large, and constantly growing. Which is great to see. 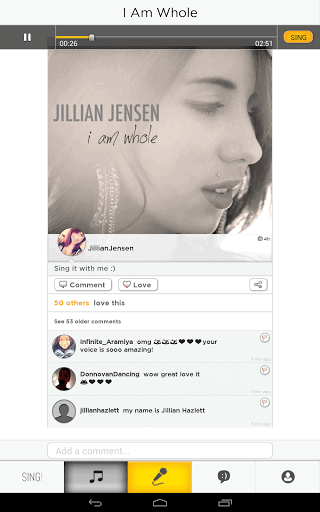 With Sing! you can sound like a star. Using their voice enhancement technology. You can also compete with top performers all across the world, by aiming high and getting on the Top Performances list. You can also share it with the world via Facebook, email, SMS, Google+, and Twitter. Some of the other features include

It's a great app with plenty of great features and awesome songs that you can sing. Sing! Karaoke is compatible with Android 4.0 and above. So if you're running Ice Cream Sandwich or Jelly Bean you'll be able to use this app. It weighs in at about 12MB in size. So it won't take up all your space on your phone or tablet.