Which OS is the king of tablets? Until recently, the only answer was Apple’s iOS on both the iPad and the iPad Mini. The difference was so big, that everyone said that Android was dead on tablets, that they didn’t have a chance against Apple’s reign in that market. But slowly, Android tablet market share began to rise, very slowly in fact, but it was on the move, until one day, Google said, hey, look at this new 7 inch tablet, it’s amazing and it’s dirt cheap! And it turns out, that the only major problem Android tablets had, was pricing, because the Nexus 7 flew off the shelves, while Asus had some success with its Transformer line and Samsung made its usual market approach and released a gazillion tablets in all shapes and sizes. Things began to look better for the Android tablet market share and some analysts started saying that there was a chance that Android tablets surpassed the iPad in a few years, somewhere around 2015.

Well guess what? They were wrong, it didn’t take years to do it, right in the middle of 2013, Android tablet market share is way above the iPad’s. According to Strategy Analytics report for the second-quarter, the global tablet shipments puts Android at 67 percent of worldwide shipments and iOS at just 28.3% while Windows keeps getting single digits with 4.5% of the market. 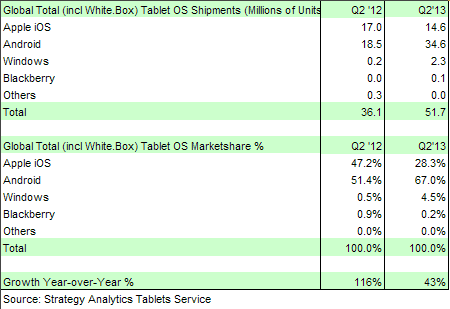 The total number of tablets shipped in the second quarter of the year is a whopping 51.7 million units, out of which 34.6 million are Android tablets and 14.6 are Apple’s iPad and iPad Mini.

Of course, if you have to look for a single tablet to be king, Apple’s iPad is still number one, but we’re comparing platforms here and not specific vendors. Google’s business is the services business not the hardware business so from Google’s point of view, this is the only number that matters.

Google’s Play Store might still be behind Apple’s App Store when it comes to tablet apps, but numbers don’t lie, people are investing in Android tablets and that means that the tablet app ecosystem is only going to get better from now on, the same thing happened with the phone ecosystem a few years ago. With Google’s push into tablets, with filters on the Play Store and the Nexus 7 and 10, the day that apps come to Android the same day or before they hit iOS will be here in no time.

If you want Strategy Analytics full report, it’s going to cost you $6,999 unless you’re a subscriber, but I think this numbers are enough for most people. Plus, with that amount of cash you can buy about 30 new Nexus 7 and use 1 for each app you like. I’m not saying that’s practical, but you could do it.