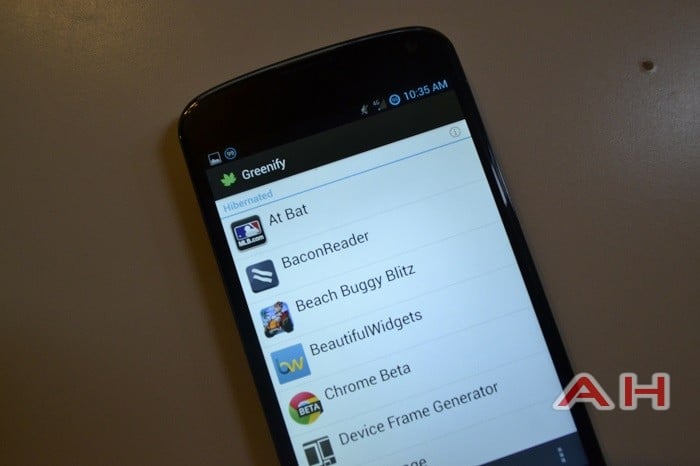 Over the course of Android's lifetime, there have been many apps to come out that promise to extend your battery life. Just to name a few, there's Juice Defender, Qualcomm's Battery Guru, and many others. The only problem with those is that they provide a placebo effect. You're basically leaving an app running to save your battery, which doesn't make a whole lot of sense right? I've tried many of them on all different kinds of devices I've owned over the years. Then I came across Greenify. A lot of my friends/followers on Google+, Facebook and Twitter have said that it greatly increases their battery life. So I thought I'd give it a try. Wow does it do a great job.

The difference between Greenify and other apps, is that it's not always running. What it does is hibernate a list of apps that you've chosen when the device is asleep. And that's about it. So today, we are going to walk through how to set it up.

It may not seem like a lot, but trust me it's definitely worth it. Before when I would unplug my Nexus 4, Battery Widget Reborn would tell me I have about 12-14 hours of battery life left. With Greenify, it's about 22 hours or longer. Now remember, this is all on HSPA+ and LTE for me. So if you're on Wi-Fi all the time, you're battery will have much different numbers. So if you're rooted, you'll want to give Greenify a try. What do you have to lose? What do you use to increase the battery life on your Android devices?