Lot’s of Android 4.3 news going on. So let’s start with AOSP. Android Open Source Project is where developers can go ahead and download the code and create their own ROMs. Jean-Baptiste Queru has just posted on the Android Building Google Group that we’ll see the code later today. In other words, he’s working on uploading the new code right now. Here’s the full message from good ‘ol JBQ!

Google Airlines welcomes you on the ground in Android International Open Source Airport Project. The local time is exactly 4:30 pm. We will be taxiing for a few minutes to our gate JSS15J while ground support guides us to the public git server.

We hope that you had a pleasant flight and we welcome you to Jelly Bean, or that you have a conflict-free rebase while connecting to your final version.

Your source files will be delivered down the https://android.googlesource.com stairs, in hall jb-mr2-dev, on carousel android-4.3_r2.1. Oversize kernel source files will follow a few minutes later at the counter.

Customs forms are available at https://developers.google.com/android/nexus/drivers and need to be filled before starting a device build, even if this is not your first trip to Jelly Bean.

If you forgot to pack something in your luggage, pre-packed luggage is available athttps://developers.google.com/android/nexus/images that contains everything you might need.

Should you have any questions, our agents are standing by at the android-building Google Group. Complaints and suggestions can be filed at http://b.android.com. Volunteers can head to the android-contrib Google Group, and job applicants to http://google.com/jobs

Even if you’ve visited Jelly Bean before, you will notice that our graphics public transportation is now smoother and more energy-efficient. The city is also safer for everyone, with an entire block dedicated to children. Location Hill was renovated, and the repaving of Bluetooth Avenue continued all the way to BTLE Street and AVRCP 1.3 Park. Our filesystem garbage collection service can now handle active households that generate a lot of trash.

On behalf of all of Google Airlines and of our Android ground crew, captain Conley and cabin chief JBQ wish you a pleasant experience with Android 4.3 and we hope to see you again soon. 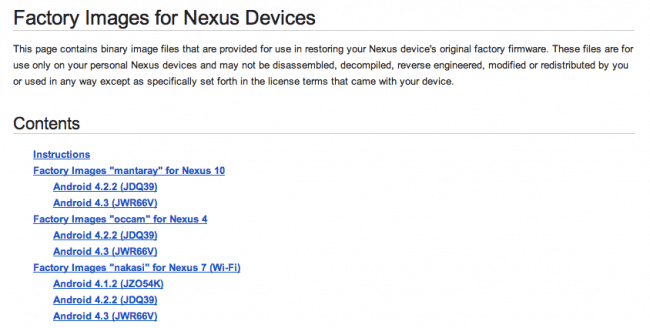 In addition to AOSP, the factory images for the Nexus 7, Nexus 4, Nexus 10 and Galaxy Nexus are now available for download. For those that don’t want to wait for the OTA from Google. Speaking of OTA’s, those will start later today and probably last for the next two weeks for all supported Nexus devices. Which include the GSM Galaxy Nexus, Nexus 4, Nexus 7 and Nexus 10. Google also said the Google Play Edition Galaxy S4 and HTC One will be getting the update “very soon”.