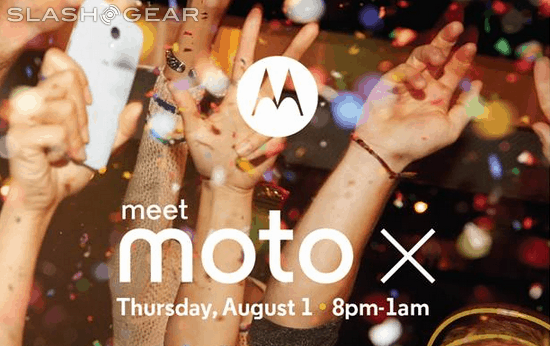 Last week, Motorola sent out invitations to their Moto X event on August 1st. We learned from that invitation that Motorola is holding various media sessions all day long and all the information is embargoed until 3pm. Which means you will not see any official information about the Moto X until after 3pm EDT on Thursday, August 1st. Motorola was promising "No Stage. No Crowds" in the original invite. Which also means the event won't be livestreamed, unfortunately.

Now Motorola is sending out new invitations which are telling us a different story. It appears that Motorola will be holding an event after all the media sessions that starts at 8pm and lasts until 1am. It looks to be a type of party, probably related to the Moto X. The invitation mentions that there will be some entertainment from the likes of DJ Kaskade, M4SONIC, Thank You X, Chef Marc Forgione, SOL REPUBLIC, and more. There's even a comedy team JASH scheduled for the event.

Additionally, on the image shown above, you see the Moto X in white. Which I think looks better than it being in black, and the first white phone that actually looks good. But then again, that's all my own opinion.

So it looks like Motorola is having a rather big event on August 1st for a phone with "mid-range" specs. While the Moto X is slated to have mid-range specs, I don't think it's a mid-ranger at all. With all the features and software optimization it will probably compete with the Galaxy S4, HTC One and LG G2 pretty well on store shelves. That will be especially true if the rumors of the off-contract price are true.

So what do we not know about the Moto X? Not much. But you can rest assured that the leaks and rumors will not be stopping anytime soon. So make sure you stay tuned to Android Headlines. How many of you are excited for the Moto X to finally be announced next week? Let us know in the comments down below.