What you see in the picture above is Google’s Sundar Pichai holding an HTC One Google Play Edition and now that it’s out, some of you might be wanting to get a taste of the famous “stock Android experience” but don’t want to have to buy a new phone, specially if you just acquired an amazing device like the HTC One or you’re tied to a 2-year contract.

There’s been some rumors that HTC would offer a ROM for those who want to change their Sense 5 experience for the Google Play one, but there’s been no official announcement or any word about it so we can’t count on that yet.

Luckily, as we like to say in the Android world, there’s always a way. That way usually comes from the amazing developers at the xda-developers forum, I’ve seen those guys come up with the most amazing and complex things and this is not the exception. You can now download the ROM that came with the HTC One GPE and install it in your own GSM HTC One with a few steps.

Careful, this steps are not for everyone, although this is not a hard procedure, it does require some know-how. But truth be told, if you’re looking into the stock experience, chances are you know your way around your device.

If you want to proceed, you have to be rooted. If you don’t know what that is, I recommend you to do some research and then come back here for the instructions. You can download the Hasoon2000 HTC All-In-One Toolkit from it’s forum thread, that will guide you through the process of rooting the HTC One so you can install the new version on it.

Once that’s done, download the ROM from this thread which is exactly like the version found in the Google Play Edition with version 4.2.2 with just one addition, Busybox and Superuser are pre-installed on the device, which makes a lot of sense to just throw that in there since you’ll be needing both in the future. 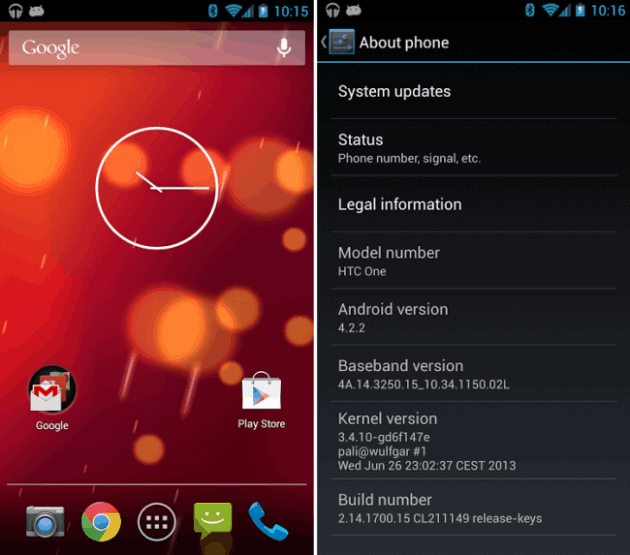 Everything in the ROM works except for one thing, the built-in Wi-Fi hotspot, so you’ll need to find a third-party app that does it, but there’s a whole bunch of them in the Play Store, so you should be fine. Everything else works as expected, even the non-functional stuff like the IR blaster, but other stuff like Beats Audio work just fine. There’s only one known bug which is that clicking the data quick-setting tile will cause Settings to force close, this is due to the fact that there is no data usage section in Settings. This might be fixed in the future, but for now, just avoid it.

Don’t forget one thing, this is meant to be a “Google Experience” not to be confused with a Nexus device, Google is not in charge of these devices, they will not post the images and won’t handle the updates (although they said they’ll work closely with HTC and Samsung). All of that will be handled by HTC and Samsung respectively. If you want direct updates from Google and all of that, then buy a Nexus, which by the way is half the price.

If you just want to buy the actual HTC One Google Play Edition, you can do it in the Play Store for $599 unlocked.