Toshiba, like many manufacturers, has struggled to produce a quality Android tablets over the last couple of years. At the beginning of 2012, the company announced its foray into the tablet market with the Excite line of devices. The devices ranged in screen sizes from 7-inches all the way to 13-inches, but despite a solid spec sheet, never sold very well. Flash forward a year, and Toshiba has just announced its revival of the Excite lineup with three new devices.

Toshiba has announced that it is launching not one, not two, but three new Excite tablets powered by Android. The big selling point with these devices are the gorgeous displays. Two of the three tablets have a display with a resolution of 2560 x 1600 and Toshiba's PixelPure technology. These devices compete head to head with the Apple iPad Retina technology and the display found on the Nexus 10 by Samsung.

The three tablets include the Excite Pro, Excite Write, and Excite Pure. The devices have features such as a 10.1-inch display, Tegra 4 processor, Harman Kardon speakers, and a touchscreen digitizer that supports precise input and handwriting on the display. All three tablets also run Android 4.2 Jelly Bean.

"With more and more consumers adopting tablets as their go-to devices for entertainment and travel, we wanted to push the boundaries even further and equip our new Excite tablets with the technology and features needed to maximize the potential of these devices," said Toshiba's vice president of marketing Carl Pinto. "By focusing on boosting the capabilities of the screen – from increasing the resolution to adding a digitizer option – we're also evolving the way consumers can use these devices from consumption to creation." 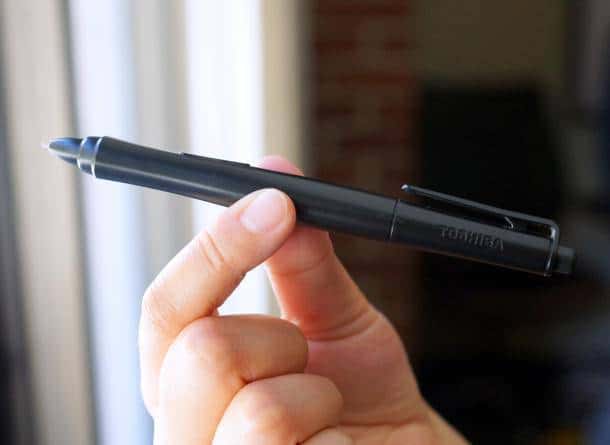 Toshiba touts that the displays on the Excite Write and Pro have 4 million pixels on the screen, equaling roughly 300 pixels per inch. The company also highly praises the Excite Write for its precise digital pen and display. The TruPen, which Toshiba says brings the "pen and paper" experience to the tablet has 1,024 pressure points. It allows you to write words in cursive on the screen and then will search through your handwritten notes to find a match. The TruNote app allows you to easily edit stories and take notes.

The Excite Write and Excite will launch for $599 and $499 respectively, and both will come with 32GB of storage. Other specs include a Tegra 4 processor, a 2560 x 1600 IPS display, Gorilla Glass 2, and Harmon Kardon speakers. They will launch from Toshiba on June 25th and from other retailers sometime in July.

The Excite Pure is the budget-friendly model of the trio and comes with a 1280×800 IPS display, microUSB, micro HDMI, a Tegra 3 processor, 1.2MP front facing camera, microSD card slot, and stock Android 4.2. It will launch at the same time, though will cost $299 for 16GB of storage.

What do you think of these Toshiba tablets? Do they have what it takes to compete? Let us know down below!