Skip to content
Trusted By Millions
Independent, Expert Android News You Can Trust, Since 2010
Publishing More Android Than Anyone Else
33
Today
222
This Week
966
This Month
3938
This Year
121542
All Time Sony made two announcements at both ends of the screen size scale, on the low-end of the scale, the new SmartWatch SW2 with a 1.6 inch screen, and on the other end, the Xperia Z Ultra and it’s massive 6.44-inch screen.

That screen is what really draws you in, but the fact that it’s so big might make it a little hard to wrap our heads around it and see how would it fit into our lives, our hands, or even our pockets. So, here’s a comparison to some of the most common (and largest) devices out there like the Galaxy Note II, the Galaxy Mega 6.3, the Galaxy S4, the Sony Xperia Z and others. It’s amazing how even a huge device like the Galaxy Mega 6.3 looks small next to it and I won’t even mention how an iPhone 5 looks next to this giant.

But it’s not massive all over, the Z Ultra has an incredibly thin profile at just 6.5mm which is reasonably thinner than Samsung’s Mega 6.3 that sits at 8mm or the Note II at 9.4mm. Sony obviously found a way to make this new device really thin and sturdy, proven by the fact that the Xperia Tablet Z is just 6.9mm.

Here’s how it compares to other devices visually: 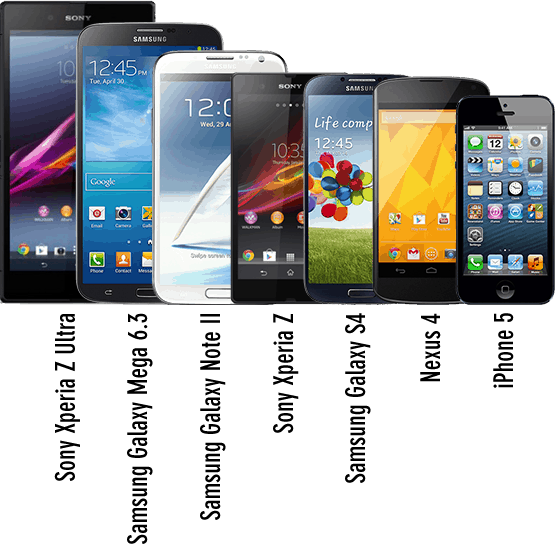 The specs of the Z Ultra are equally impressive with a Snapdragon 800 clocked at 2.2 GHz with an Adreno 330 GPU, Android 4.2.2 Jelly Bean, Water and dust resistance, 2 GB of RAM and an 8 MP camera. Check out our announcement post for more on the device.

If you think you might like the Xperia Z Ultra, you might want to start stretching your pockets to fit it or get used to carrying a backpack.