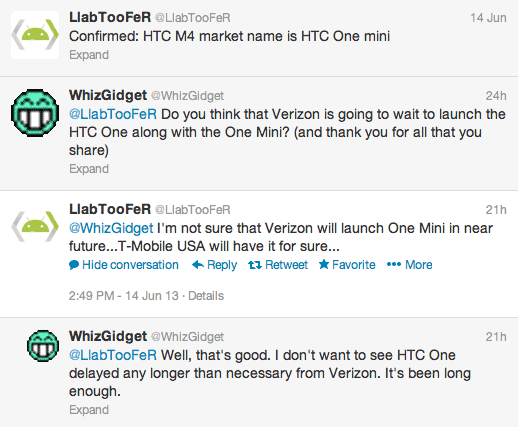 We've seen rumor after rumor about the HTC One Mini. A device that will probably sell quite well. Now HTC Insider @LLabTooFeR is passing along some information that the HTC One Mini will be landing on T-Mobile. So what about Verizon? Well that looks very unlikely. But then again, it could be a case of the HTC One again. Since Verizon will be getting the HTC One around 4-5 months after their competitors. They might do the same thing with the One Mini.

The HTC One Mini is said to sport a 4.3-inch display with a 720p display. That would be 1280×720. Along with a dual-core processor and the Ultrapixel camera. Of course Boomsound will be onboard along with Sense 5.

Additionally there is the HTC T6 which is also rumored and supposedly sporting a 5.9-inch display at a 1920×1080 resolution. It's also rumored to be the first device running Android 5.0. But since Android 5.0 hasn't even been announced yet, if that rumor is true it's still a long way from being unveiled.

HTC seems to be very interested in making their One brand a success in 2013. So far they haven't released anything else other than the HTC First which was a huge flop for the Taiwanese manufacturer. HTC has also partnered with Google to create the HTC One Google Edition which will run stock Android. Which is heading to the Play Store in about 11 days for $599.

The HTC One Mini will probably be one the best looking 4.3-inch devices on the market when it does launch. But it'll depend on how HTC launches it. I really hope they can get it on most of the US carriers. That will definitely help them out and we all know they create great devices, but have a bad track record with availability, especially with the HTC One.