Skip to content
Trusted By Millions
Independent, Expert Android News You Can Trust, Since 2010
Publishing More Android Than Anyone Else
36
Today
36
This Week
481
This Month
481
This Year
118383
All Time We expected Android 4.3 to be announced at Google I/O, but that didn’t happen. We were expecting Android 5.0 – Key Lime Pie to be coming in the fall, which might still happen but looks to be unlikely at this point. But Jinesh Shah has created some UI concepts for Key Lime Pie that look rather awesome, but they also look a bit iOS 7-ish. At least that’s my opinion.

Graphic designers are always looking at creating concepts for upcoming software and devices. Not to long ago we saw some concepts for the Nexus 5, Nexus 8 and Nexus 11, which looked pretty awesome. But back to these Key Lime Pie concepts. As you can see from the images throughout this post, the icons look to be a bit more flat, at least the camera and phone icons do. Then looking at the Hangouts and Google Now widgets on the home screen, it appears to be a bit more transparent which looks really nice to me.

There’s also a transparent task bar, a redesigned clock widget, redesigned Google search widget, some changes to overlapping widgets, along with scrollable widgets on the lock screen. Some of these images look really nice and I’d love for Google to add some of these concepts into Key Lime Pie. 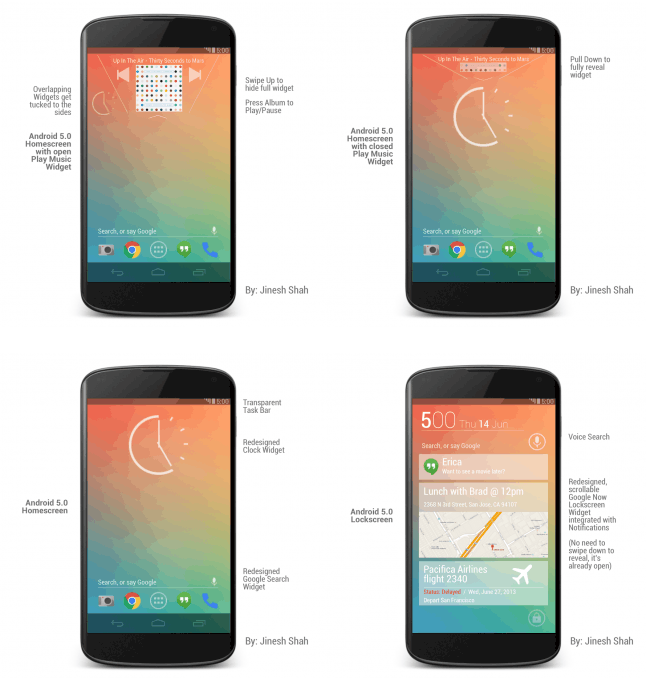 Remember that these are concepts, not a leak or rumor. Key Lime Pie may look totally different from this. But concepts are always awesome to take a look at and drool over. Personally I really like the background. Great job +Jinesh Shah, hope to see more concept images for Key Lime Pie soon.

How many of you are looking forward to Key Lime Pie? Let us know in the comments down below.