Samsung and Apple have always been very close in terms of device sales, but over the last few months Apple has trudged ahead thanks to the hype surrounding its iPhone 5 flagship. Prior to that, Samsung was comfortably outselling the iPhone with its Galaxy Note lineup and Galaxy S lineup. Finally, however, it looks like the 'wow' factor is wearing off of the iPhone 5 and moving back to where it belongs: around Samsung devices.

According to data from the Canaccord Genuity analyst Michael Walkley, Samsung outsold Apple in the United States during the month of May. This is the first time that this has happened since Apple launched the iPhone 5 at the end of September

To calculate these statistics, Walkley uses store surveys. During those surveys, his team discovered that carrier sales representatives were often pushing the Galaxy S4 and HTC One over other devices, which helped the two companies have a sold month in terms of sales. 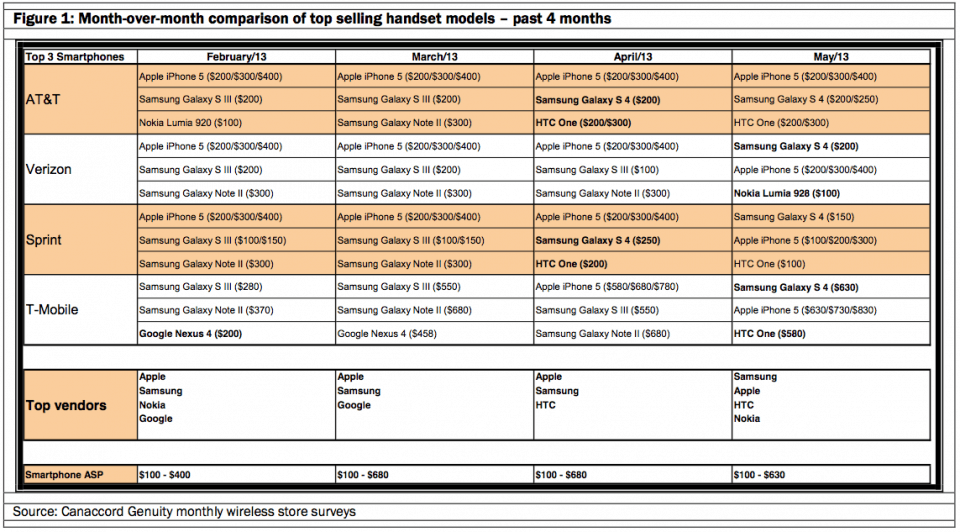 "We believe dominant sales of the S4 versus other Android smartphones was driven by Samsung's extremely strong Galaxy consumer brand and well-executed marketing campaign, as our surveys indicated store representatives often recommended the HTC One ahead of the Galaxy S4," Walkley said.

This happened last year, as well. Apple was beating Samsung in terms of sales for a few months following the iPhone 4S launch, but Samsung trudged ahead with its Galaxy S3 flagship and later with its Galaxy Note II device.

As far as HTC goes, its One flagship was the number three selling smartphone at AT&T, Sprint, and T-Mobile. Obviously, it is not yet for sale from Verizon, so it remains to be seen how well it will do from Big Red. Overall, Samsung was the top smartphone vendor, while Apple followed in second, and HTC and Nokia finished in third and fourth respectively.

We imagine that Samsung will continue to lead the United States market in terms of sales until this fall, when once again, Apple takes over for its few months of fame.

Trusted By Millions
Independent, Expert Android News You Can Trust, Since 2010
Publishing More Android Than Anyone Else
2
Today
161
This Week
664
This Month.
8105
This Year
109577
All Time