In the past Samsung has had problems with launching too many devices too fast, and as well the company has been doing in the past few years, it still has yet to solve that problem. With the Galaxy S4, we're already about to see three variants of the device, including the Galaxy S4 Zoom, Galaxy S4 Active, and Galaxy S4 Mini. It remains to be seen if those devices will come to the United States, though it does look like the Active will make its way to AT&T this summer. Now, we have information about yet another Galaxy S4 variant, and this one sounds even more pointless than the other three.

The Samsung GT-I9600 appears to be powered by the heavily rumored Android 4.3.2 operating system and has a processor clocked at 1400MHz, or 1.4GHz. In the AnTuTu benchmark test, the device scored about 15,000 points. 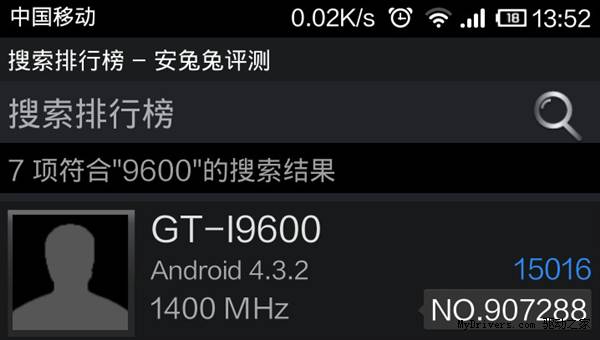 Should this be a Galaxy S4 Plus, then we are most likely looking at a slightly improved processor, more RAM, a bigger battery, and of course Android 4.3 Jelly Bean, though it's unclear what changes Android 4.3 will offer.

It's also important to note that an Android developer could fake these results rather easily. With that said, I'd take this benchmarking result with a rather hefty grain of salt.