Qualcomm built itself a pretty recognizable brand with Snapdragon processors of the last few years. Had you asked someone who Qualcomm was a while back, most people would have responded with a blank stare. Qualcomm's Snapdragon line of processors powers most of the flagships we've come to know and love, including the United States Galaxy S4 variants, HTC One models, and numerous tablets. Qualcomm on Tuesday sent out a press release detailing some of its future processors, and as you imagine, the company has no plans of slowing down whatsoever.

The press release sent out by the company details new Snapdragon 400 processors and features headed to the line of chips. The biggest news out of it all, however, is the addition of multimode 3G/4G LTE support, which will provide manufacturers with an integrated LTE compatible chip for a much lower price than its other processors, such as the Snapdragon 600. This feature will be available on all of the recently announced Snapdragon 400 processors and reference design quad-core and dual-core processors by the end of the year. The Snapdragon 400 processors are aimed at budget devices for the most part, and Qualcomm says one of the goals with the chips are to provide emerging markets with support for 3G and 4G networks when the time comes. Essentially, Qualcomm is future proofing the devices that will hit emerging markets, as they obviously will not be able to afford an upgrade whenever data service launches in their town.

"By offering a multimode 3G/4G LTE variant to Qualcomm Snapdragon 400 tier of processors with quad-core CPUs, we are ensuring that emerging regions are equipped and prepared for the imminent transition to multimode 3G/4G LTE, in addition to being equipped for every major 2G and 3G technology," said Cristiano Amon, executive vice president of mobile and computing products for Qualcomm. "Snapdragon 400 processors provide customers with a wide range of innovative smartphones for both the high-volume and mid-tier segments." 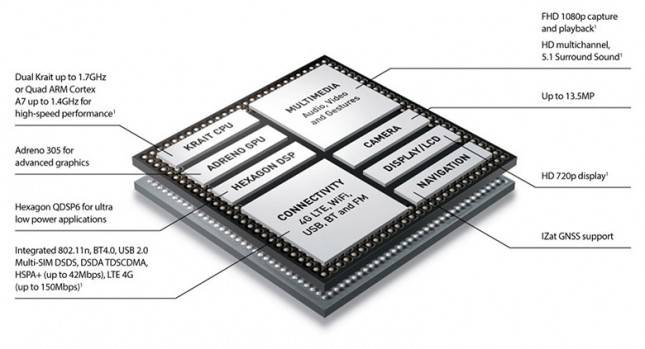 For example, Qualcomm has integrated many standards in the Snapdragon 400 chips that are important to China and other emerging markets, such as TD-SCDMA, HSPA+ (up to 42Mbps), and multi-SIM capabilities. Even though the chips are supposedly budget oriented, they also feature integrated Qualcomm VIVE 802.11ac Wi-Fi, Bluetooth, FM and NFC.

Google has said multiple times that it wants to bring data services to emerging markets, and with Qualcomm's lower-end chips now supporting the service, it certainly seems fitting that the two may work together, as both companies would benefit greatly from more citizens in emerging markets accessing the internet and using smartphones and tablets.