Last week, LG and Google finally announced the mythical white Nexus 4. The device had been rumored for a long time, but the two companies finally confirmed last week that the device would be rolling out globally over the coming weeks. Customers in the United States was pretty lucky, however, and saw the white Nexus 4 released just a few days after the initial confirmation. The device was listed on both the Google Play store and T-Mobile website and offered to consumers at the same price as the black model. Google did note, however, that the white Nexus 4 was a limited edition model and would not be sold forever. Less than a week later, though, one model of the device appears to already be sold out, at least temporarily.

If you saunter on over to the Google Play Store, you'll notice that 8GB white and black Nexus 4 models are still available and shipping in 1-2 business days, as is the 16GB black variant. The 16GB white model is listed as "temporarily out of stock," which if we had to guess, means that it will return at some point. Though, that's not confirmed and it may very well be that the device has already sold out.

It's unclear why the device sold out quickly, especially when the more affordable 8GB model is still there. We all know the horror stories that surrounded the initial launch of the Nexus 4 last fall. Google didn't make enough devices to keep up with demand, which in return caused the Nexus 4 to repeatedly switch between in stock and out of stock on the Play Store. That could be the case here, as well. It's possible that Google was not expecting very many people to purchase the white model and therefore didn't make as many as it should have. It's also feasible that Google simply needed supply of the white Nexus 4 to launch in other countries, so it took some of the US inventory. 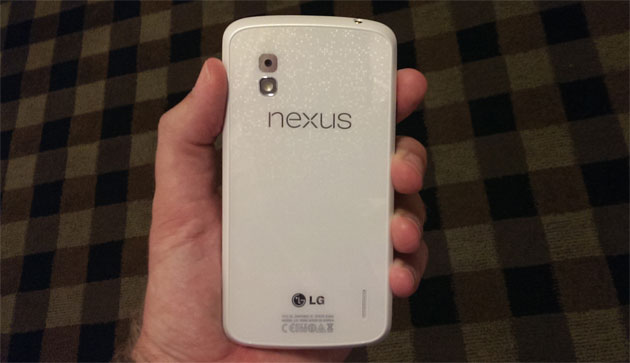 The 16GB white Nexus 4 is still listed on T-Mobile's website as in stock, however. Should you want to purchase it from the carrier, the device is compatiable with the Simple Choice plans. On those plans, the device will run you $19.99 down with 24 payments of $17 a month payments. For those unfamiliar with the plans, Simple Choice ditches the two-year contract and allows users to make a smaller down payment on a device and pay it off over two years.

Were you able to get your hands on a 16GB white Nexus 4? Why do you think they are sold out already? Let us know down in the comments!