Skip to content
Trusted By Millions
Independent, Expert Android News You Can Trust, Since 2010
Publishing More Android Than Anyone Else
11
Today
78
This Week
105
This Month
4822
This Year
122392
All Time

Since the standard size for flagships seems to be around 5″ these days, manufacturers are also starting to go back to smaller phones for people who are still not used to large phones, or they simply don’t desire them. This is why we’re starting to see a lot more “Mini” versions of the flagship phones, from more manufacturers.

It seems the Oppo Find 5, the world’s thinnest phone, will also gets its own mini version, according to some recent leaks. However, unlike the mini versions of the Galaxy S4 and HTC One, which are still pretty large for some people, at 4.3″, this will be 3.7″ in size. I think anything that has an under 4″ screen is too small for smartphones today, even if you’re planning on getting them for kids.

Larger displays have great advantages, as they allow you to see more on the screen, and to better handle what’s being shown on the screen, especially if we’re talking about games, which become easier to play on larger screens than on smaller ones. But at the same time, people will be getting devices that are comfortable to hold in hand and to use, so I imagine some would still prefer a 3.7″ phone over a 4″ or 4.3″ one. 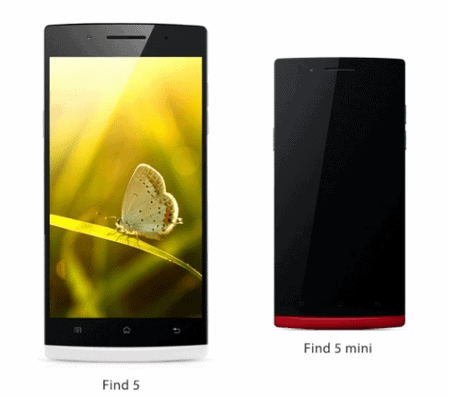 These smaller phones also tend to have lower specs and prices. I think that has more to do with the fact that OEM’s expect people to believe that if it’s a much smaller device, than it should be much cheaper to make than a bigger one. That’s true for things like screen, resolution, and battery, which if they are smaller, can help cut costs. But at the same time, they are using weaker processors to make the price even lower compared to the regular sized version.

The Oppo Find 5 is supposed to have the same quad-core 1.2 Ghz Cortex A7 CPU from Mediatek that many other mid-range devices are using, and 1 GB of RAM. What’s surprising is that it should have an HD resolution, just like the HTC One Mini, which is quite big for a 3.7″ device, and it resolves to almost 400 PPI (297). I don’t think this resolution was needed for this size, but if it helps other mid-range devices that are even 4″ or 4.3″ to adopt the HD resolution faster, then I’m all for it.

The Oppo Find 5 Mini price should be somewhere between â‚¬199 and â‚¬299, and should be unveiled next month.