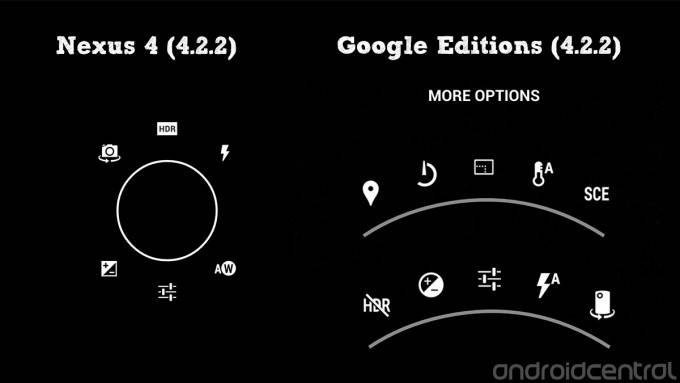 If you've been following the leaks for what we thought was Android 4.3, then you've seen this new camera app on a Nexus 4 a few weeks ago. Today, the Galaxy S4 and HTC One Google Edition phones were released on Google Play and start shipping July 9th. They feature a brand new Camera app. Well maybe not brand new, but it is a bit different.

The picture above from Android Central, shows the differences between the Google Edition phones and a stock Android 4.2.2 device like the Nexus 4 or Nexus 10. The version on the Google Edition Galaxy S4 is sitting at version 1.1.40012 while the Nexus 4 has 1.1.4001. The UI is still relatively the same, but they've changed how you get into settings of the app. Instead of the ring, you've got to rows on the screen that show you everything. Making it much easier to adjust your camera.

They have moved the options around a bit, which is understandable. But will we see this "new" UI on Android 4.3? Or will we be getting an update to 4.2.3 soon? Who knows. Google might even throw the stock camera app into the Play Store. But I doubt it would get as many downloads as the stock keyboard would. We're hoping that the camera app on the Google Edition Galaxy S4 and HTC One aren't too terrible. But we should know soon how good or bad they really are.

There have been rumors of Android 4.3 dropping today. But I highly doubt that will happen. Of course, we'll be keeping our eyes and ears open looking for Android 4.3 or even 5.0. As many of you are excited for a new version of Android, I don't think anyone is more excited than our team here at Android Headlines. We want some new software to play with.

How many of you have ordered the Galaxy S4 or HTC One Google Edition already?