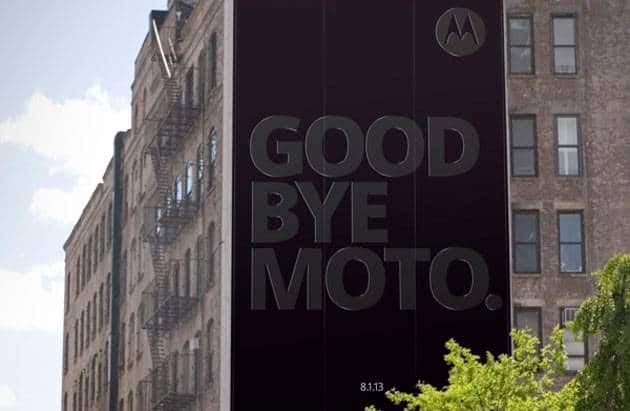 The folks at Behance.net has put together an upcoming ad campaign, as you can see in the picture above it’s “Good bye Moto.”. But it looks like something huge is coming from Motorola.

These pictures are on B.A. B¤kken’s Behance page, which is an online design portfolio page for designers to showcase their work. It’s labeled as “Pitch work”, for Motorola, the images tell a pretty interesting story of Motorola going away while they work on something really drastic, and possibly bringing us the next big thing. “New Ideas. New Technologies.”

We’re not good at goodbyes. No one is. They’re hard. And sad. But the time has come. After nearly a century of innovation, we must say farewell. Farewell to the first handheld cell phone. To the Razr. To the game snake. Farewell to the Motorola that has shaped today.

It’s time to start building tomorrow. Change is afoot. New faces. New ideas. New technologies. The Motorola that returns will not be the company you once knew. But we have some work to do. So until we’re ready, we’re going away. No new ads or tweets. No site updates. Just silence until we begin the next chapter.

Until we meet again, goodbye Moto.

Based on this, it’s kinda hard to figure out what Motorola is up too. But we are pretty sure it’s the Moto X. Since Dennis Woodside has already basically confirmed its existence. But the “Goodbye Moto.” is quite strange as to what it could mean.

Many of the images mention the date 8.1.13, which of course is August 1st. Now it could be a placeholder, it could also be the date that Motorola announces and possibly launches the Moto X. Perhaps this is a rebranding for Motorola? Maybe Google is going to completely absorb the OEM after all? Who knows, but we’ll be looking into this some more to find out what’s going on with Motorola.