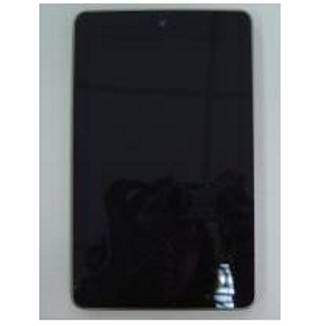 We've been hearing lots about the next generation Nexus 7. Including seeing, what we think is the new Nexus 7, pass through the FCC and Bluetooth SIG as the K009. We don't know for sure that this is the Nexus 7, but it seems very plausible, especially since we are expecting it to go on sale next month. The FCC also shows us that the K009 is a multi-band LTE device, supporting AT&T, T-Mobile and even Verizon's LTE networks.

The picture above is what we, and many of our sources believe is the next generation Nexus 7. Now of course it looks really similar to the current Nexus 7, but it does look like the bezels on the left and right are a bit smaller, which is what we wanted. Aside from that, the Nexus 7 is said to be packing a 1080p display, Android 4.3 – Jelly Bean, 5MP rear camera, 1.2MP front-facing camera along with a 3950mAh battery. We've heard about 4 different processors that could be inside the Nexus 7, so we won't list those. But what's interesting is that the battery is going to be smaller than the original Nexus 7. The Nexus 7 already gets great battery life, but you know we always need more, especially when getting upgraded to a 1080p display.

So far we don't know when the next Nexus 7 will be unveiled or when Android 4.3 will go official. But we are hoping that it happens anyday now. Like normal Android fans we are itching to get our hands on new devices and new software. Hopefully Google delivers soon enough. I don't know about the rest of the early adopters of the Nexus 7, but I'm anxiously awaiting to upgrade my Nexus 7 with a new tablet.

What does everyone think about the picture? Is that the second generation Nexus 7 tablet from ASUS? Let us know in the comments down below.