Ever since the original HTC One launched, we've been hearing reports of a smaller device have been floating around. The device was originally codenamed the HTC M4, but recent reports have suggested that the smaller model will simply be called the HTC One Mini. We saw leaked images of the device last month, but now Engadget has now gotten its hands on yet another image of the device, this time a full frontal view next to the larger original HTC One variant. 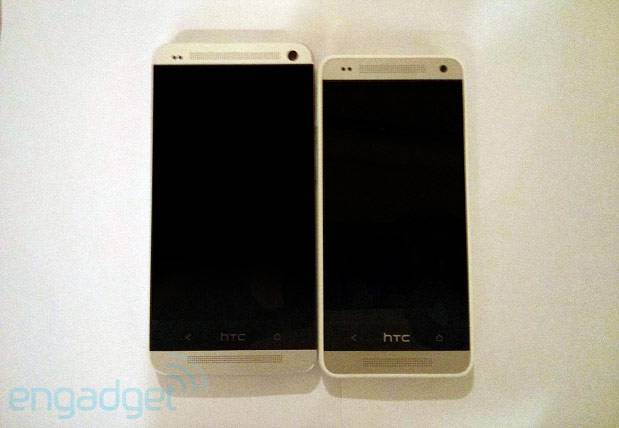 Design-wise, it looks nearly identical to the full-size HTC One. It features the same front facing Boom Sound speakers, as well the same exact button layout. The bottom houses the microUSB port in the same spot. The back also houses the Beats Audio logo, as well as the same 4MP UltraPixel camera sensor.

Other specs reportedly include a dual-core processor instead of the quad-core chip found in the regular variant, a 4MP UltraPixel camera, 2GB of RAM, and 16GB of internal storage. It features the same IR blaster as the original model, as well as Beats Audio capabilities. The source also claims that the device will launch sometime in Q3, which falls in line with what we've seen in other reports.

According to an earlier report, the device will launch for a price of EUR400, which comes to nearly $520. We're really hoping that the price will be less here in the United States, as the unlocked HTC One is running just $80 more at $600. Given the drop in specs and size, it doesn't seem like the prices should be that close to each other.

As someone who has grown annoyed with large phone sizes, I really wish that manufacturers would launch a smaller variant of a device without compromising on the specs, but it looks like that just won't happen. I harbored hope for the HTC One Mini, but at this point it seems  nearly certain that the One Mini will feature a dual-core processor, while the larger model is quad-core.

Nevertheless, that doesn't mean other people won't buy it. What do you think of the HTC One? Will you be buying one? Let us know down in the comments!

Trusted By Millions
Independent, Expert Android News You Can Trust, Since 2010
Publishing More Android Than Anyone Else
34
Today
177
This Week
512
This Month.
7960
This Year
109432
All Time