Back at Google I/O 2013, Google held a session about the design of Android apps and focused heavily on the slide out navigation panel. During the presentation, the company accidentally leaked images of a redesigned Gmail interface, which was finally officially announced last week and started rolling out to Android devices on Tuesday. Well, Google who loves to apply a singly design theme to all of its apps, like Holo, has now updated the official YouTube app with some of the same characteristics we saw during the Google I/O session and in the new Gmail app.

On Tuesday, Google updated the official YouTube for Android app with a slightly redesigned interface. The YouTube app has always had a slide out navigation sidebar, but with the latest updates, the company has made several tweaks to the feature. For one, the actual slide out animation has been tweaked. The side navigation bar is also available throughout the entire app, whereas it was previously only available on the homepage and other certain points. Having it throughout the app also makes it easier to quickly jump to things such as your account, subscriptions, playlists, and more. It seems to work really smoothly and makes navigation a whole lot easier. 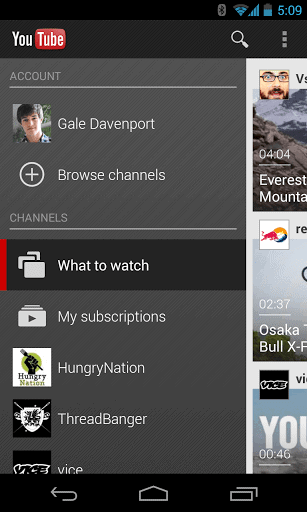 Also in this update Google removed the "app button" from the corner. Now a simple swipe or tap of the button in the upper left will launch the slide-out menu. 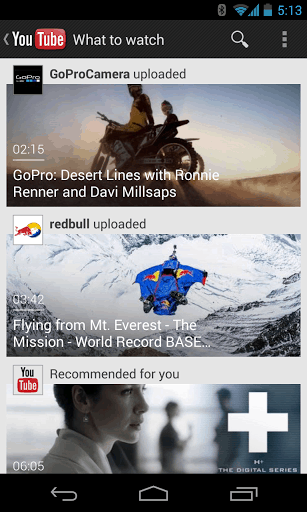 The whole "video suggestion overlays during playback" is still a bit mysterious to everyone. No one that I know of has gotten a video suggestion to appear on top of their video while watching it, which is a good thing I think. That could get quite annoying after a while. Finally, you have your standard bug fixes and stability improvements applied in this update.

Have you gotten the new YouTube update yet? How is it performing? Have you gotten any "video suggestion overlays during playback"? Let us know down in the comments!