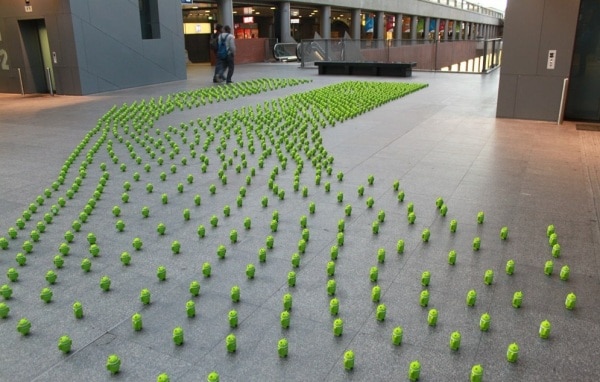 If you remember when Android was just starting to take off, Microsoft's CEO Steve Ballmer dismissed the platform because Google had this crazy idea to offer it free-to-use to OEMs. Obviously, Google never planned on making money from Android sales directly. They monetized the platform in a completely different way. Rivals were quick to dismiss the mobile operating system, and so were a lot of consumers even. Now, just years later look how far Android has come.

According to a new report from eMarketer, Google generated $4.61 billion from mobile advertising revenues last year (2012), which accounts for nearly half of all mobile advertising revenues in the entire world. In other words, they cleaned house thanks to their mobile advertising strategies. It's really not a stretch to believe either, consider how many people carry a smartphone with them everywhere these days and break that down to just Android users. Google is earning a lot of money from people, some of which are probably just bored during their morning commute.

Furthermore, eMarketer predicts that by the end of the 2013 fiscal year Google will report $8.85 billion in mobile advertising revenue which nets to about 56% of the global [mobile advertising] market. That's insane, especially when you compare the progress of Google's competitors.

At the end of the day, it's pretty clear how Google was able to accomplish all of this. Android was their big ticket, and because they allowed OEMs to use the platform for free it quickly became one of the most widely used mobile operating systems, among other reasons. Google prominently displays their search and other services throughout the core of the platform which in turn leads to much higher mobile advertising revenues.

All in all, it seems Google planned this out from the very beginning. Their initial decision not to charge licensing fees for using the Android platform was a smart one.

Ballmer, looks like it's time for you to eat your hat- or perhaps a Surface tablet?